“Is the collective agreement finished? Unfortunately not. But for the purpose of reducing the high unemployment rate, it would be desirable to bring an end to comprehensive labor agreements. What an executive board and a secretly chosen works council can and want to agree on benefits them both. However, the applicable law to a large extent prohibits them from making company agreements and instead they are under the thumb of the common functionary ambitions of the employer’s association and the union. Both the board and the council are far from independent operators. Both fight for prestige and power – and for the preservation of their extensive official bureaucracy.“ (Helmut Schmidt, 2001)

On the first of May one can see how unions are doing. Labor Day was once their most important holiday. In a sea of red flags, trade unionists celebrated the annual High Mass of the labor movement. Calls for revolution were admittedly rather rare; however, tones of class struggle were common. Unions were force to be reckoned with. They were often drivers of policy. Today it is a rather weary event. Fewer and fewer workers have the desire to unionize themselves. Only a dedicated core still participates in the celebrations on May 1st, still waving red flags. Trade unions are now only a shadow of their former selves. Their wage and collective bargaining clout has shrunk. Collective bargaining agreements apply to increasingly fewer workers and entrepreneurs. Only in the public sector are they still strong. Their influence on politics has declined. They are increasingly dependent on the (emergency) assistance of politics. Trade unions have become a welfare case. Here in Germany Andrea Nahles, the unionist Federal Minister of Labor, energetically offers assistance. This comes at a price: free collective bargaining is becoming increasingly politicized.

Unions – do they (still) exist?

Homogeneous groups can achieve their goals more effectively than individuals. This applies to workers as well. No wonder they have long organized themselves into unions. With this power they have repeatedly succeeded in making themselves heard in the past, not only in the labor markets, but also in the social sphere. This, however, has been over since the beginning of the 1980s. Since then, their power and their political influence have fallen into ruin. The degree of organization is declining everywhere in the wealthy countries. In some countries, such as the USA or France, less than 10% of the workforce is organized into labor unions. There is no end in sight. In Germany too, the degree of organization has fallen below the 20% threshold. Only Scandinavian countries are decoupling themselves from the general trend. There, the degree of organization has admittedly gone down as well. However, it is still significantly higher than elsewhere. Obviously, the specific institutional framework of voluntary unemployment insurance and labor unions plays a role (here). 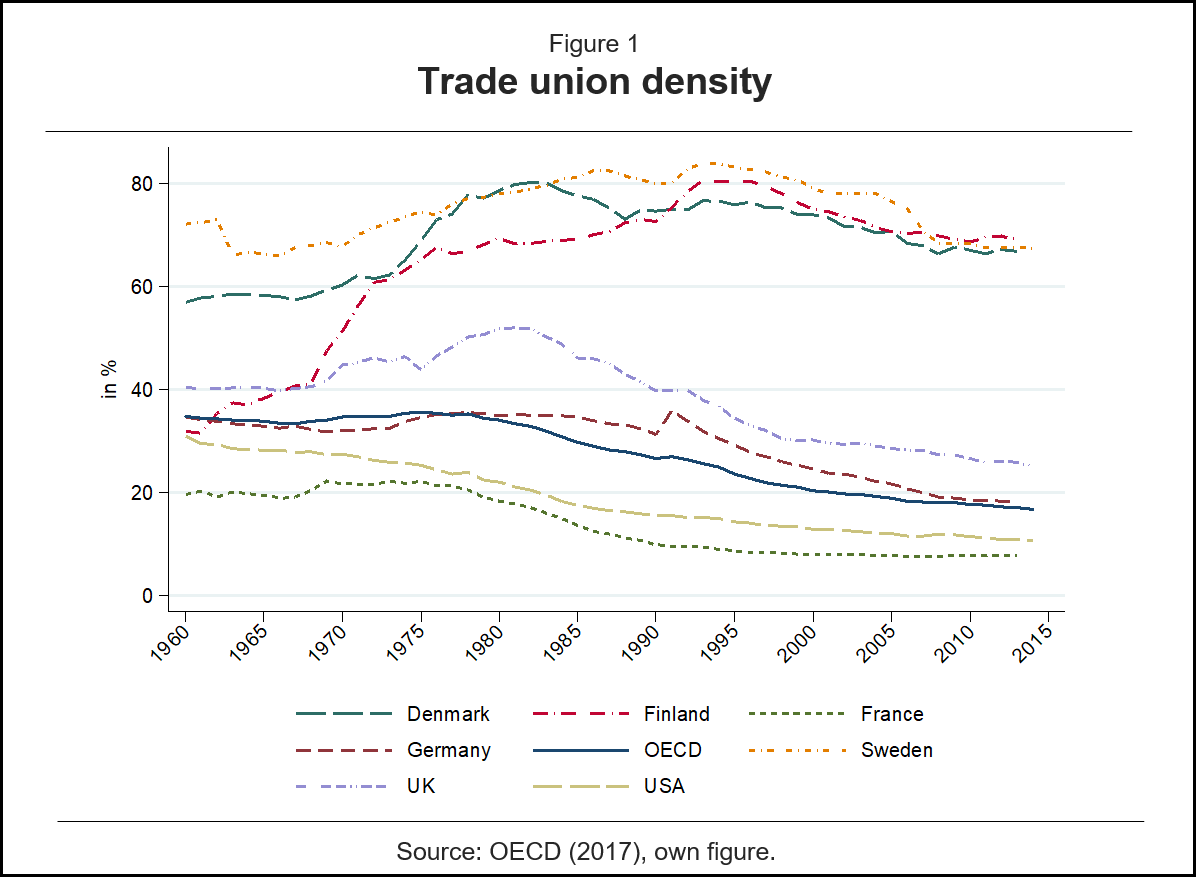 Structural change and heterogeneity are steering the descent of labor unions. Globalization and technological progress are causing it to accelerate. Relatively large (co-determined) corporations are the heart of labor unions in the industrial sector. Deindustrialization threw it out of rhythm. Above all, the male clientele of labor unions in the industrial sector are the victims. They bear the main brunt of structural change and leave the labor unions in droves. The service sector is growing, to be sure. There, jobs are created en masse, mainly in smaller companies. Women are the primary beneficiaries of this development. But they are difficult to organize. And something else affects the labor unions as well. Structural change gnaws on the solidarity of workers. Economic heterogeneity is increasing. On the one hand, the profitability of companies is becoming more strongly distributed. On the other hand, the demand for skilled labor is increasing; middle- and low-skilled workers are losing. The interests of workers are becoming more heterogeneous. This reduces individuals’ incentives to join a united labor union.

The “old“ class struggle is dead

Â Trade unions represent the interests of workers. They have taken up the cause of the fight against capital. Up until the oil price crises it appeared to be going very well for them. The functional distribution of income on labor and capital hardly changed. The labor income share, the share of GDP made up of work income, did not exhibit much variation. This was also reflected in the macro-models of economists. There, it was assumed for decades that labor receives a little less than two-thirds of the cake, capital a bit more than one-third. This finding also affected the personal income distribution. It developed rather evenly. Labor income was long the primary source of income for workers. Ever since the mid-1970s, however, everything has changed. The labor income share has declined. There are cyclical “ups and downs“, but the trend clearly points downward. Although the labor income share is increasing at the moment due to positive cyclical prospects, there is little evidence that the financial crisis has actually altered the general downswing. 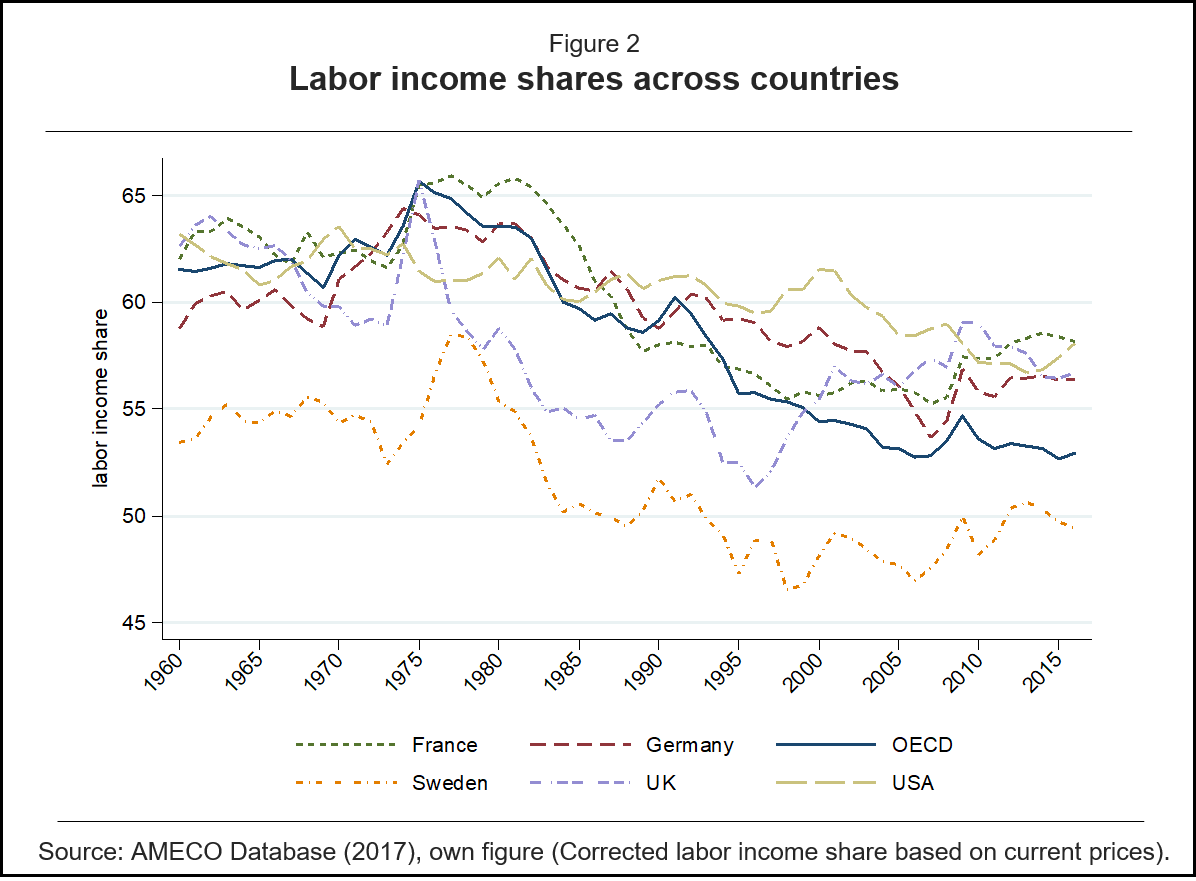 The labor income share and the degree of organization have both been decreasing since the beginning of the 1980s. At first glance, there is much evidence that weaker trade unions are no longer able to stabilize the labor income share. However, this assumption is false. No significant positive correlation exists. It is instead other factors that drive both the labor income share and the degree of organization. The most promising candidates to explain the declining labor income share are globalization and technological progress. This was once again confirmed by the IMF in the latest publication of the “World Economic Outlook“ (here). It did not rule out growing cartelization of the markets of individual sectors as an additional factor. Globally more open markets and a specific type of technological progress (“skill biased“) do not just change the distribution of incomes between labor and capital. They also redistribute income within the group of wage earners. Employees with intermediate qualifications come away particularly badly from this situation. However, it is from this group in particular that trade unions recruit their industrial clientele.

Globally more open markets and “skill biased“ technological change do not bode well for trade unions. Their degree of organization is eroding, and the labor income share is declining. The “old“ class struggle against capital seems to be lost. And it’s getting worse for them. Globalization and technological progress make the world more economically heterogeneous. This also puts the old-fashioned institutional framework of the labor markets to the test. The individual industries are developing differently economically. The trend towards a more decentralized wage and collective bargaining policy is intensifying. The first victim is the comprehensive tariff agreements, which lump far too much together. They are admittedly increasingly often circumvented and replaced by alliances for work (“Betriebliche Bündnisse für Arbeit“). This is not, however, in the organizational interest of the bargaining partners. It’s no wonder that they struggle against it. However, the demand for decentralized institutional agreements continues to grow. Trade unions and employers’ organizations are on the defensive. Works councils and corporate management are winning. 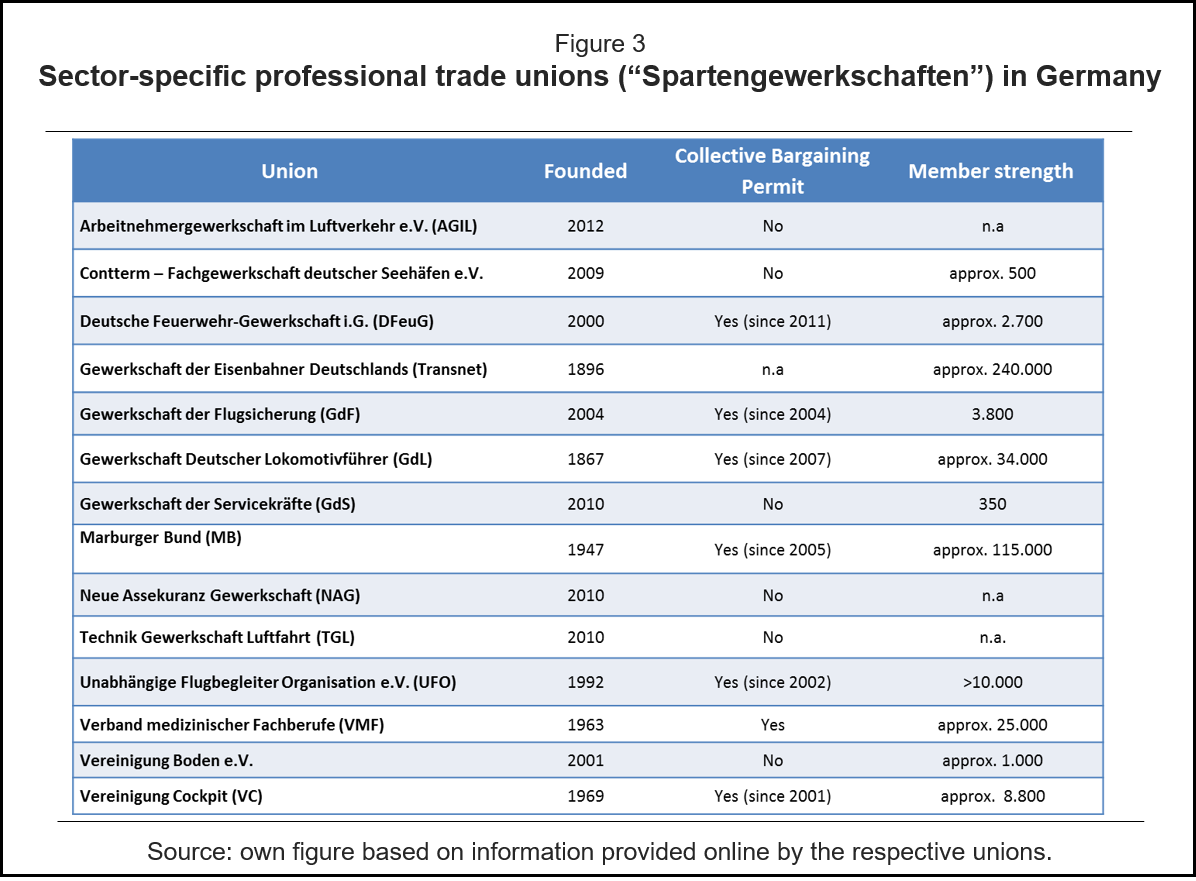 The second victim is the principle of bargaining unity. Technological progress and globalization are turning the structure of labor demand upside down. The demand for qualified workers is particularly high. Technological progress is playing right into their hands. If they are in “key positions“ within companies they generate high “windfall profits“. It is therefore not surprising that they want to have a larger piece of the pie. Solidarity with workers who are less sought after in the job market, and who often possess lower qualifications, is not their primary concern. The internal distribution struggle among workers is becoming more intense. Workers possessing skills for which demand in the labor market is high are increasingly less supportive of the redistributive strategies initiated by collective bargaining and alliances for work. These coveted “specialists“ have substantial incentives to take matters into their own hands and found professional labor unions (here). Doctors, air traffic controllers, pilots, and locomotive engineers are the winners of growing economic heterogeneity. This “new“ class struggle between workers has begun.

Are unions a welfare case?

The labor unions are not to be envied. Their members are fleeing in droves. No end is in sight. This weakens them. Their once “strong arm“ no longer has the power to hold this development at bay. Â The degree of coverage of collective bargaining is decreasing. Political blank patches with regard to wages and collective bargaining are cropping up everywhere. The “old“ class struggle against capital is lost. At the very least, it is not going to be won through traditional political wage and collective bargaining instruments and archaic rituals of political negotiation. The wage share continues to fall. Worse still, a “new“ class struggle has broken out among unionized workers. More strongly desired workers break off their solidarity with the others. Through newly formed, specialized professional trade unions they challenge the unified trade unions. The latter is having a hard time in the institutional competition with the newcomers. The decaying degree of organization forces them to join together to form larger unions. They believe that this is the only way they will be able to survive. However, with their trademark of wage and collective bargaining “solidarity“ they can no longer adequately represent the heterogeneous interests of individual professions. 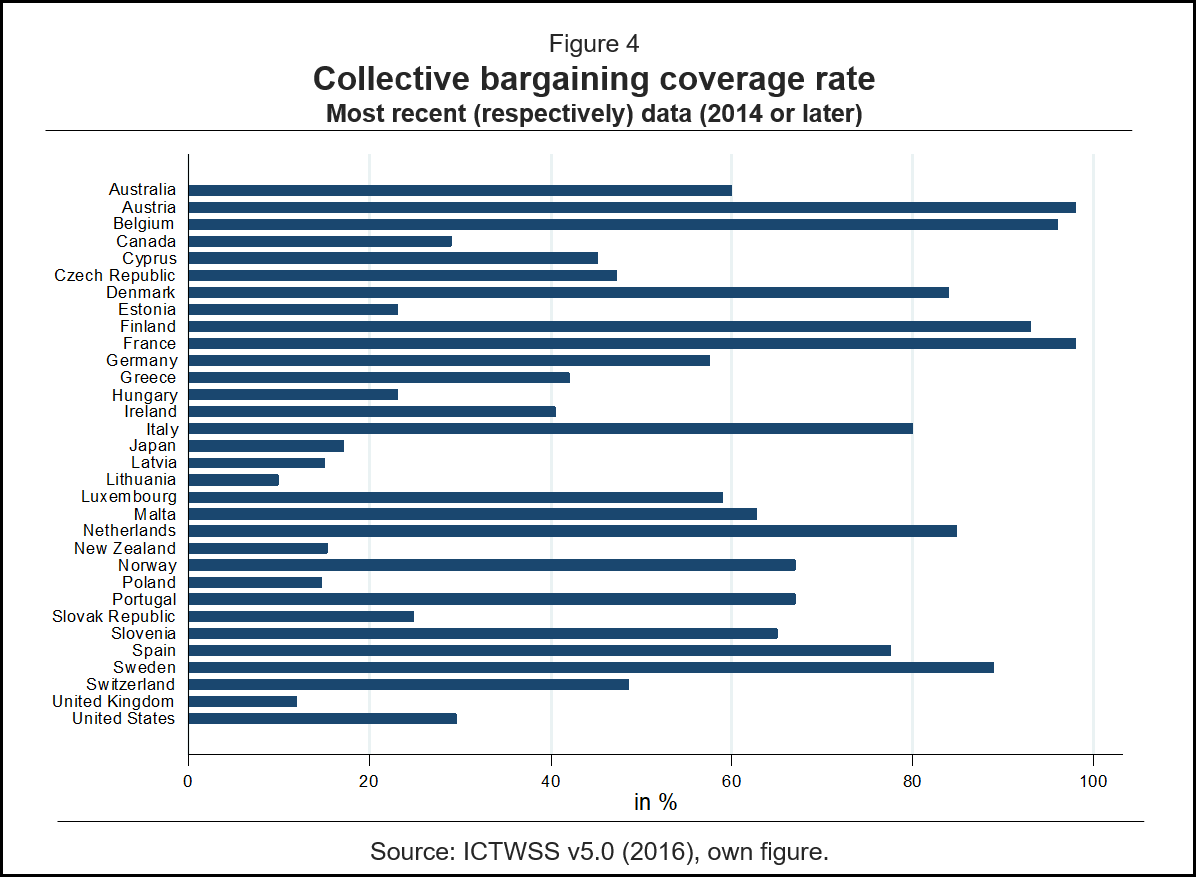 Almost everywhere one looks, unions are a mere shadow of what they once were. Since the early 1980s their organizational bedrock has been breaking apart. This is the result of structural change and economic heterogeneity. Globalization and technological progress are the driving forces behind both of these developments. The unions have long since lost the “old“ class struggle with capital. The labor income share continues to plummet. Heterogeneous interests of workers are triggering a “new“ class struggle. Alliances for work are eroding the traditional industry-level agreement. Wage and collective bargaining blank patches are emerging with increasing frequency. Newly founded specialized trade unions that support specific labor market skills challenge the old unified trade agreements. Institutional competition is in full swing. What is clear is that when the real conditions change, the institutional framework has to adapt. The unions do not want to accept this. They want the government to help them (and the employers’ associations) tame institutional competition. They will not succeed in eliminating economic laws. However, free collective bargaining will fall by the wayside.