Failure of the “liquidationists” to overcome the Great Depression of the early 1930s prepared the ground for an era of interventionist economic policies. Modern macroeconomics and finance nourished the belief that we can successfully plan for the future. But the present crisis teaches us that we live in world of Knightian uncertainty, where the “unknown unknowns” dominate and our plans for the future are regularly thwarted by unforeseen and unforeseeable events.

The financial crisis has led many people to doubt the merits of free markets and a liberal economic regime. They blame markets for the financial and economic crisis and demand tighter regulation and, in effect, more central planning by governments as a remedy. In this paper I shall argue that both the analysis on which this view is based and the policy recommendations are flawed. This crisis has been caused by too much reliance on the effectiveness of economic and financial planning for the future. The roots of this behavior lie deep. Failure of the “liquidationists” to overcome the Great Depression of the early 1930s prepared the ground for an era of interventionist economic policies. Modern macroeconomics and finance nourished the belief that we can successfully plan for the future. But the present crisis teaches us that we live in world of Knightian uncertainty, where the “unknown unknowns” dominate and our plans for the future are regularly thwarted by unforeseen and unforeseeable events. We have suffered from “control illusion“. It would be misguided now to look for the public sector to successfully exercise control. We need to recognize the limits of planning for the future and the superiority of a market-liberal economic order, where states, firms and individuals can be held liable for the financial decisions they have taken.

2. The predecessor of today’s crisis

To develop our point we first take a look at the historical predecessor of today’s financial crisis, the depression of the 1930s. During the 1920s easy monetary conditions and an exaggerated appetite for risk, evidenced by extreme leverage in the popular equity trusts, fuelled the build-up of a stock price bubble. When monetary conditions were tightened eventually, the edifice of leverage came down and the stock market crashed in October 1929.

At the time, the authorities took the crash in stride. Many policy makers felt that the crash and a possible recession afterwards were needed to eliminate the excesses and imbalances that had built up during the roaring twenties. Andrew Mellon, then US Secretary of the Treasury, brought this view to the point when he said: “…liquidate labor, liquidate stocks, liquidate farmers, liquidate real estate… it will purge the rottenness out of the system. High costs of living and high living will come down. People will work harder, live a more moral life. Values will be adjusted, and enterprising people will pick up from less competent people.” (Hoover, 1952, p. 30). Inspired by Mellon’s attitude, those sharing the idea that a recession was a “cleansing event“ were later dubbed “liquidationists“.

The “liquidationists“ could claim theoretical support for their view from the Austrian school of economics around Ludwig von Mises, Joseph Schumpeter and Friedrich von Hayek, which built its view of the business cycle on the work of the Swedish economist Knut Wicksell. Wicksell distinguished between a natural rate of interest, which reflects the return on investment, and a market rate, which reflects the borrowing costs of funds charged by the banks. When the market rate is below the natural rate, companies borrow to invest and the economy expands. In the opposite case, investment is reduced and the economy contracts.

The Austrian school used this idea to develop a theory of the business cycle that puts the credit cycle in the centre (Chart 1). Low interest rates stimulate borrowing from the banking system. The expansion of credit induces an expansion of the supply of money through the banking system. This in turn leads to an unsustainable credit-fuelled investment boom during which the “artificially stimulated” borrowing seeks out investment opportunities with diminishing returns. The boom results in widespread overinvestment, causing capital resources to be misallocated into areas which would not attract investment if the credit supply remained stable. The expansion turns into bust when credit creation cannot be sustained““perhaps because of an increase in the market rate or a fall in the natural rate““and a “credit crunch“ sets in. Money supply suddenly and sharply contracts when markets finally “clear”, causing resources to be reallocated back toward more efficient uses. 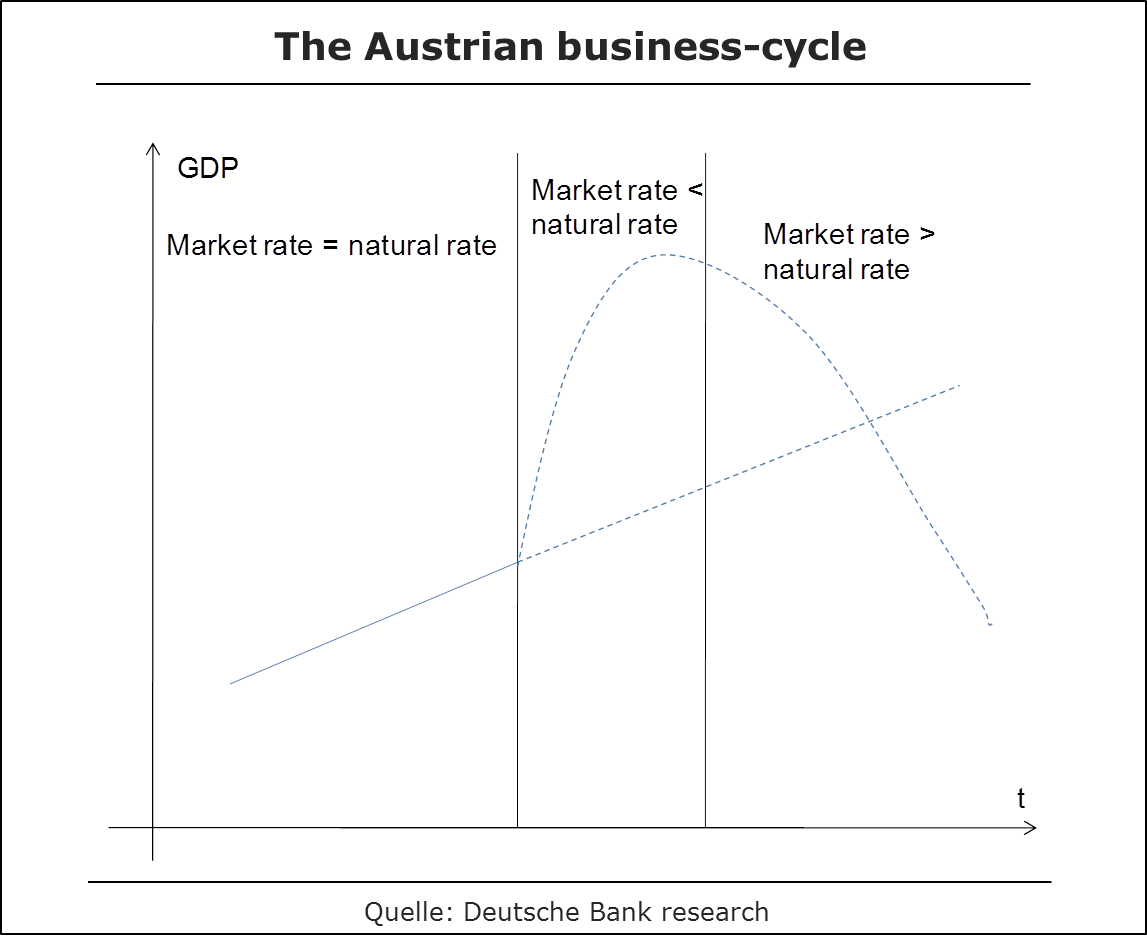 The liquidationist approach to economic policy in the aftermath of the 1929 stock market crash““for which Mellon became the symbol““accepted the downturn in the early 1930s as inevitable. What they missed was that extreme risk aversion can keep the market rate above the natural rate even after “the rottenness“ has been “purged out of the system“. Franklin D. Roosevelt, who beat Hoover in the 1932 presidential elections, seems to have intuitively understood this problem. Perhaps the most important action Roosevelt took shortly after his inauguration in early 1933 was to guarantee bank deposits. As a result, cash that people had hoarded under their mattresses came back to the banks and improved their liquidity situation. When the Roosevelt administration later in the year recapitalized banks, credit extension picked up again and the economy recovered. It is interesting that there was no big fiscal policy stimulus in 1933 – the famous New Deal was felt only later. Hence, contrary to conventional wisdom, the spark that ignited the recovery of 1934 was the turn in the credit cycle.

The importance of credit for the development of private domestic demand in the US during the 1930s is shown in Chart 2. In contrast to conventional practice of looking at credit stock growth, I plot changes in credit flows (relative to GDP) against changes in real demand. The conventional practice of plotting credit stock growth against demand growth suggests that credit is a lagging indicator of the business cycle. But comparing credit stocks with demand flows is like comparing apples and oranges. We need to compare credit flows with demand flows. When we do this, we find that the credit cycle indeed has an important influence on the business cycle. This is not only true for the US in the 1930s but holds through time and across countries (see Biggs, M., T. Mayer, A. Pick, 2009). 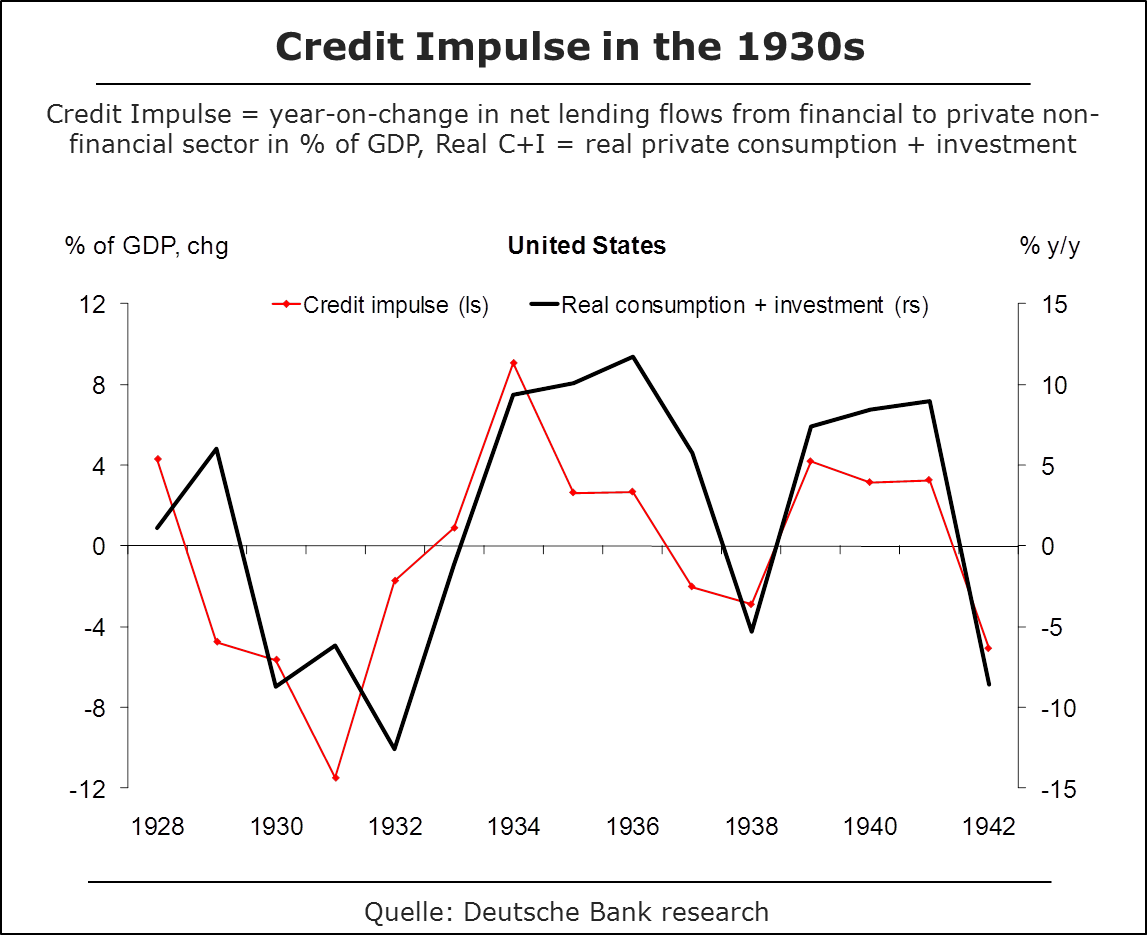 The experience of the depression and the Roosevelt recovery induced John Maynard Keynes to launch a heavy attack on the Austrian school. In his General Theory written, in 1935, he made a strong case for government intervention. Fiscal policy should come to the rescue when the public feared deflation and hoarded money. Many students of economics today believe that it was the application of Keynes’ theory that ended the downturn of 1930-33. I do not agree. In my reading of events it was the policy-induced turn of the credit cycle that did the trick. Hence, the recovery of 1934 was more “Austrian“ than “Keynesian“. Let me be clear: The liquidationists were wrong to allow the depression to happen as they failed to recognize that fear can beget fear. Roosevelt recognized this when in his inaugural speech he said “the only thing we have to fear is fear itself“, and he was right to intervene and stabilize the banks. But what he did – opening the credit markets – is what follows from an Austrian reading of the business cycle.

The Austrians have warned that a policy-induced extension of the credit cycle before all excesses have been eliminated in the economy will only delay the day of reckoning. But also they would have had to conclude that after the depression of 1930-33 one could hardly still see “excesses“ in the economies of the western world. Nevertheless, the economy tanked again in 1937 when the monetary and later fiscal policy support was withdrawn. Most economic historians argue that the period of economic instability in the US only ended towards the end of the 1930s when the country prepared for war. The British historian Niall Fergusson has even argued, that Germany got out of the depression ahead of the US because of its earlier and more aggressive preparations for war. It seems that only in the anticipation of war the “fear of fear itself“ ceased to be a de-stabilising factor in economic developments.

The historical review of the Great Depression leaves us with a disturbing conclusion: The Austrian credit cycle theory seems to have a better fit to events than Keynes’ theory of the liquidity trap and power of fiscal policy (Chart 3). What the Austrians seem to have missed is that an economy paralyzed by extreme risk aversion may need a jolt by confidence-building economic policy measures. But this was not what most economists and policy makers concluded. 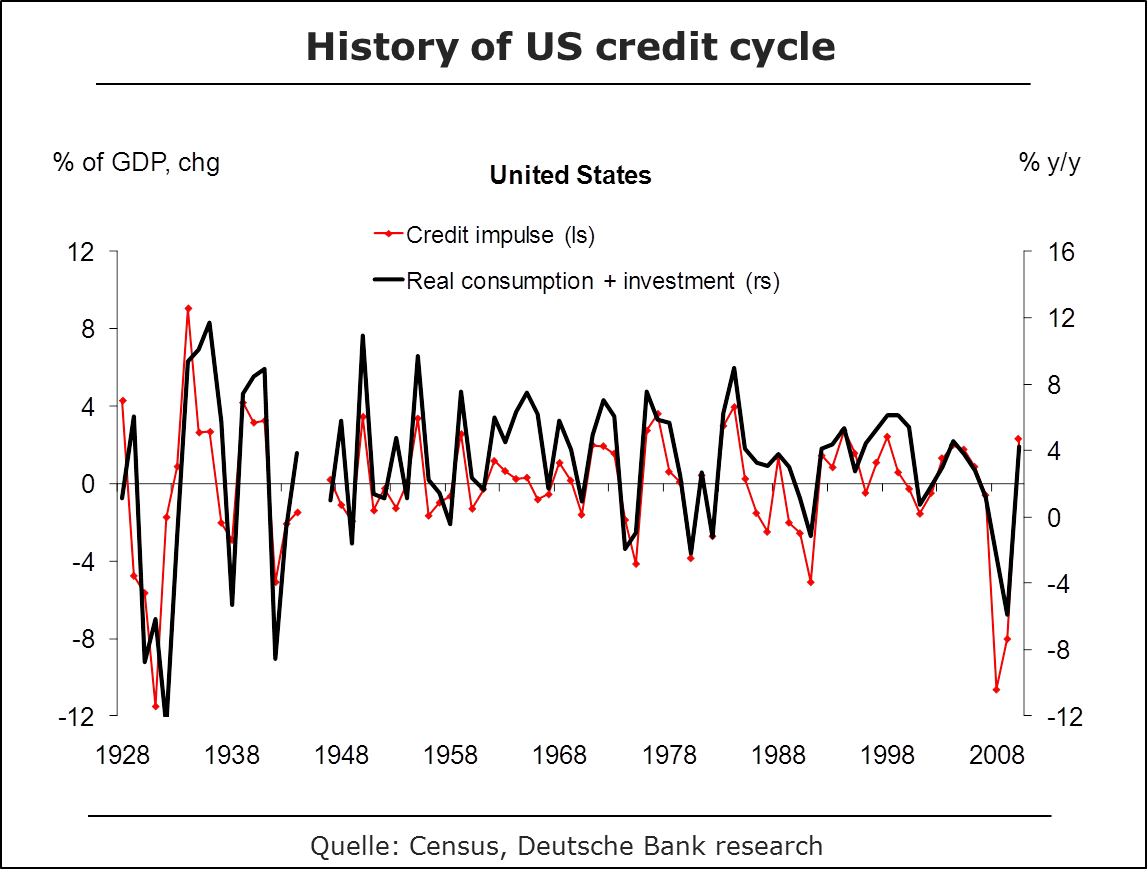 3. Lessons from the Great depression: “Over to governments“

At the end of WWII a number of western intellectuals and economists flirted with Soviet-style central planning. After all, the Soviet Union had prospered during the 1930s while the capitalist countries had been in crisis. Did this not prove that their economic model was superior?

Having lost the intellectual battle with Keynes and followers in the 1930s, the Austrians made a last stand against central economic planning with Hayek’s powerful book “The Road to Serfdom“ published in 1946. They won the war of principles and the western world did not subscribe to Soviet-style central planning, despite the allure this model was exercising on many intellectuals after WWII. Even Keynes sided with the Austrians as far as the high ground was concerned and wrote to Hayek: “In my opinion it is a grand book … Morally and philosophically I find myself in agreement with virtually the whole of it: and not only in agreement with it, but in deeply moved agreement.“ (Keynes, 1944) Nevertheless, the Austrians lost the battle over economic policy in the post-WWII western countries. Keynes’ idea of “demand management“ through fiscal policy became the mantra there after the war. Somewhat belatedly, in 1971 when he ended the link of the US Dollar to Gold, even Richard Nixon is reported to have said “I’m now a Keynesian in economics“ (see Ashmore, H., 1997, p. 298.).

From the 1950s to the end of the 1970s western economic policy makers used and abused fiscal policy as an economic management tool. Governments were quite happy to raise borrowing in economic downturns, but generally reluctant to bring it down in upturns. Towards the end of the 1960s, the use and abuse of fiscal policy created strains on government finances that could only be eased by the monetization of government debt. As a consequence, Richard Nixon on August 15, 1971 suspended the link of the USD to gold, and in effect launched the post-WWII system of fiat money.

During the post WWII period of the implicit gold standard under the Bretton-Woods System (where the USD was supposedly as good as gold), there was hardly any room for pro-active monetary policy (which, however, did not prevent the US government to use the money printing press as an auxiliary funding tool). This changed drastically after Nixon’s decision of 1971. The result was a bout of inflation as government debt and deficits were financed in part by the money printing press. As both growth and inflation disappointed, the word “stagflation“ was coined to describe the economic conditions of the 1970s. 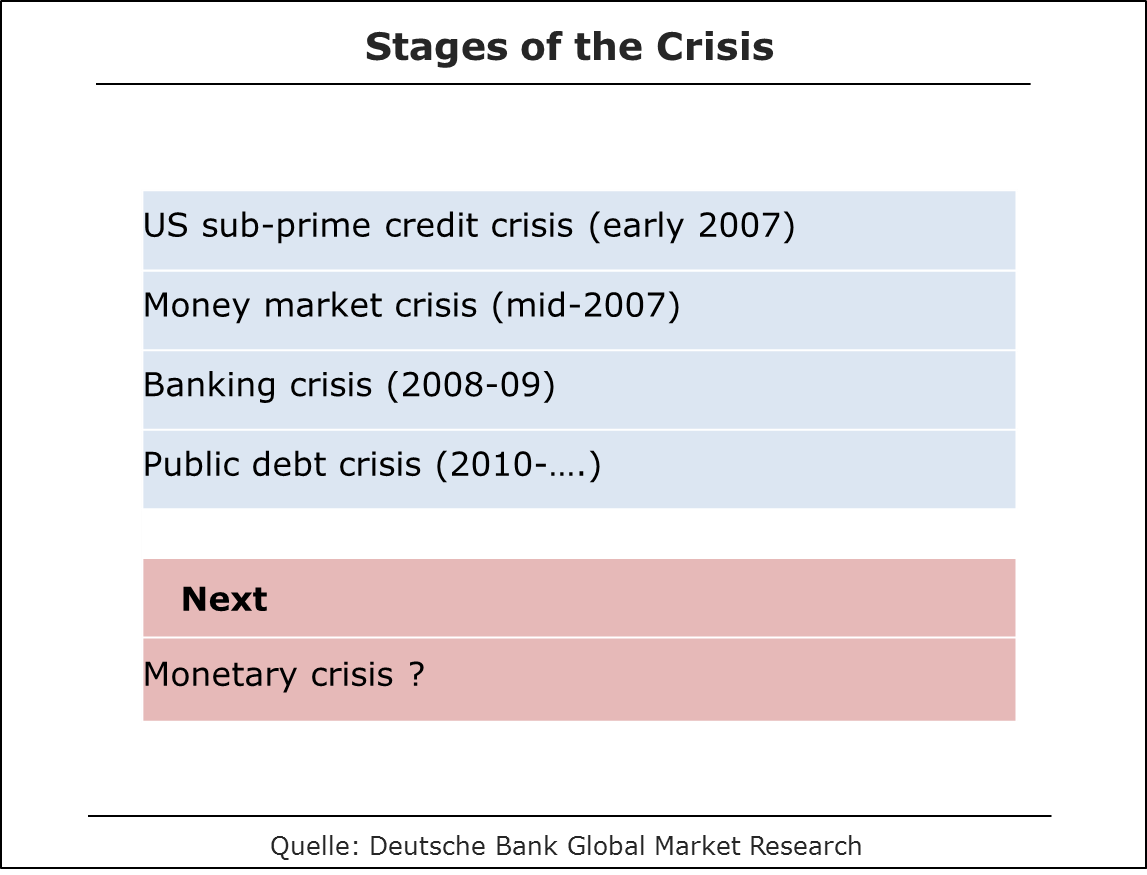