In the last decade, many important central banks have pursued an ultra low interest rate policy, thereby having provoked and extraordinary rise in credit and money supply. It might no longer be a popular view: but too much credit and money chasing too few goods and services is a recipe for inviting big trouble, as monetary history shows.

Current credit market developments suggest that monetary history might repeat itself: the international credit boom is bursting. The costs can be expected to be substantial. They are unlikely to be confined to the financial sector. The real economy will suffer as well, and the German economy won’t escape these costs.

Germany’s latest cyclical upswing has not been financed by a noticeable ex-pansion of bank loans – as has been the case in many other euro area countries. Nevertheless, the long-run relationship between money, credit and the business cycle indicators suggests that a deterioration of credit market conditions might en-tail quite some negative consequences for German economic expansion.

Taking a closer look at the data, there has been a close relationship between German GDP and investment expansion and bank growth expansion (Fig. 1 and 2). This finding can be explained by the fact that bank loans have ever since been the major external funding source for most German firms. What is of particular in-terest in this context is the fact that the latest cyclical upswing, which set in around 2003, was special; it was accompanied by a contracting real bank credit supply. 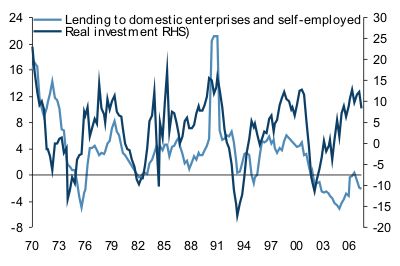 Note: Real lending rates were calculated by substracting annual CPI inflation. The “spikes“ in lending rates are due to the statistical effect of the German reunification; up to Q4 91, West Germany, thereafter Pan-Germany. Source: Deutsche Bundes-bank, own calculations.

This finding might be explained by two factors. First, the decline in bank loan supply from 2001 might be a result of de-leveraging efforts. The pronounced build-up in corporate debt in the second half of the 1990s (New Economy) for fi-nancing investment and, in particular, M&A transactions, was followed by firms’ efforts to reduce their debt levels. This, in turn, might have translated into a de-clining demand for bank loans (Fig. 3). Second, German firms seem to have be-come rather cash-rich of late, thereby allowing investment outlays to be increas-ingly financed by internal funding sources such as retained profits and write-offs. This, too, would be compatible with the finding of temporarily-low, even retreat-ing, demand for bank loans accompanied by growing GDP.

Note: The pronounced rise in the ratio in 1999 and 2000 can be ascribed to a large extent to the ac-quisition of firms/stocks etc. Source: Deutsche Bundesbank.

In particular the latter explanation would go nicely with the notion that German firms, having improved their overall price competitiveness lately, have benefited from foreign demand which, in turn, may have been largely financed by bank credit. This might explain why there is a fairly obvious relationship between the German cycle and euro-area bank loan (Fig. 4) and M1 growth (Fig. 5). Look-ing at the series, real M1 growth appears to have some quite leading properties vis-Ã -vis the cyclical movements of German real GDP growth. Real bank loan expan-sion, meanwhile, seems to correspond more to the underlying trend component of GDP growth. 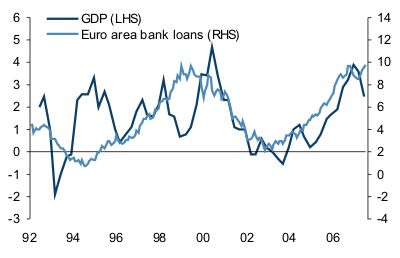 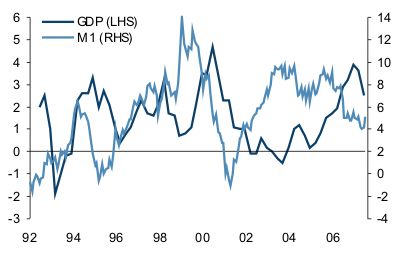 A simple vector autoregressive (VAR) model shows indeed that a decline in real M1 growth has been followed by a noticeable decline in the German business cycle as approximated by the Ifo index (Figure 6 (a)).

The direct effect of a decline in real bank loan growth on the cycle is rela-tively low, though (Figure 6 (c)). It might be due to the fact that changes in real loan supply tend to exhibit quite some inertia, as they correspond less to cyclical swings of the economy than to the medium- to long-term growth dynamics.

Figure 6: The relation between money, credit and the Ifo 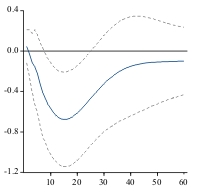 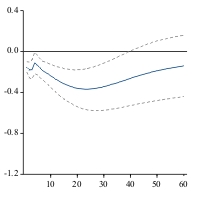 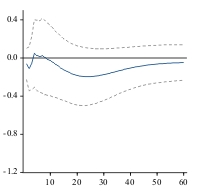 Note: The graphs show the impulse-response functions of a VAR mode. It includes as exogeneous variables: annual growth rates of real M1 (de-flated on the basis of the CPI) and real bank loans and the Ifo index (in that order) for the period January 1992 to July 2007. The optimal lag lengths were chosen on the basis of the Akaike (AIC) information crite-rion, suggesting four quarters. In Figure 4 (a) the vertical axis shows changes in the Ifo index in points following a shock (in period 0). In Figure 4 (b) and (c), the vertical axis show the change in the annual growth rate in percentage points following a shock. The shock (or inno-vation) is defined as a one-off one-standard deviation change in the forcing variable calculated over the same period. The horizontal axis shows the number of months following the shock, while the dotted lines represent the plus/minus two standard error bands about the impulse-response functions. Source: Thomson Financials, ECB; own calcula-tions.

That said, the latest slowing down of euro area real M1 growth rates, which set in around the beginning of 2006 (the ECB started tightening rates on 6 De-cember 2005, which then stood at a record low of 2.0%) would suggest that fur-ther slowdown in euro area bank loan growth has to be expected, arguing for slower German growth ahead.

On top of that, it is not too far-fetched to assume that the latest turmoil in international credit markets might translate into a sharp decline in overall credit and money supply growth, thereby exerting an additional, or even stronger, damp-ening effect on output expansion.

While this would represent a necessary adjustment for bringing relative prices back to equilibrium, the ensuing contraction is painful. So as soon as growth slows down, the public will call for even cheaper credit. However, a lower-ing of central bank rates, entailing a further increase in credit and money supply, would not solve the underlying disequilibria: it would merely postpone the neces-sary adjustment to the future, thereby increasing the cost of the final crisis.

Central banks have caused the crisis, and it is naive, even tragic, to expect that they can solve the crisis with even lower interest rates and more credit and money supply. Lowering interest rates would only increase the probability that the credit market crisis will, at the end of the day, be followed by high inflation – much higher than is currently believed.