“If you can’t explain it simply, you don’t understand it well enough.“ (Albert Einstein)

Germany is once again in the pillory. The charge is that of repeated excessively high current account surpluses. This year they are particularly high at almost 9% of GDP. Germany has once again failed to comply with the 6% recommendation of the EU Commission. The circle of prosecutors is illustrious: Southern European deficit countries, the chronically deficit USA, and the International Monetary Fund. The economic justification for the accusation is neo-Keynesian. The claim is that Germany is living with its surpluses at the expense of the deficit countries, drawing off their aggregate demand. They say that this doesn’t just take the axe to the Euro, it also destabilizes the global economy. But it isn’t the only culprit. China and Japan are thought to have aided and abetted.

The dispute over balances in the current account is bizarre. Balance sheets are an accounting construct based on statistical definitions. This also applies to the sub-balances within the balance of payments. The values of the exported and imported goods and services are shown in the current account. The capital account documents the flows of domestic capital to foreign countries and foreign capital into the country. If all the transactions are recorded, the balance of payments is always even. However, the two sub-balances – current account and capital account – may display positive or negative balances. It would be pure coincidence if they were even. Balances in parts of the balance of payments are in reality not the exception, but rather the rule.

Why do the current account balances of some countries, such as Germany, continually exhibit surpluses? Why are other countries, such as the USA, chronically in deficit? Sub-balances do not follow a collective master plan. They are driven by billions of individual decisions made on a daily basis all around the world. Households, businesses, and voters are the players, and the world is their court. Households decide whether, how much, and where they work, consume, and save. Companies make decisions about whether, how much, and where to invest and produce. The voters in the countries decide whether, how much, and which expenditures the country should undertake, taxes should be increased, or debt should be incurred.

The way in which individuals make choices depends on many factors. For example, people have different preferences regarding price stability. Where they prefer stable prices, companies are more competitive. Surpluses are established in the current account. If population ageing differs among societies, this does not fail to influence future consumption. When societies age faster, more is saved. Part of the savings is also invested abroad, leading to deficits in the capital account. People can also differ in their intergenerational preferences. A stronger preference for a comfortable life “on credit“ leads to deficits in the current account and surpluses in the capital account.

Individual decisions determine not only the extent to which the goods and services of a country are sold and purchased from abroad. They also drive the development of capital outflows to other countries and the inflow of foreign capital into the country. These decisions determine whether current and capital accounts are even or if they exhibit balances. If people are clear-headed and are held responsible for their decisions, and if the relative prices (wages, interest rates, exchange rates) are flexible, neither positive nor negative account balances in parts of the balance of payments require correction. It is therefore premature to speak of imbalances when current account balances are in deficit or excess.

Balances in parts of the balance of payments are “normal“. However, deficits in the current account must be financed by surpluses in the capital account. This is unproblematic in the case of solvent private and government actors. Private investors are willing to close the financing gap. However, if the creditworthiness of domestic actors is in danger, as was the case during the euro crisis in Ireland, Greece, and Portugal, real economic adjustments are imperative. There is the threat of a “sudden stop“. A life abroad “on credit“ is no longer possible. Companies must become more competitive, governments must consolidate their budgets. Countries with surpluses in their current account do not experience these difficulties. They are creditors.

Unsound balances in parts of the balance of payments degenerate into dangerous imbalances. There is a need for action among the countries with deficits in the current account. Countries can depreciate their own currencies, which has a relatively quick effect. Domestic companies become more competitive internationally. The imbalances in the current account are reduced, and the external financing requirement declines. However, this remedy is only successful in the long term if real adjustments take place. Rising commodity prices, which arise from devaluation, must be accepted. Purchasing power compensation through higher nominal wages must not occur. Only lower real wages ensure the necessary greater price competitiveness of companies.

Through the devaluation of the national currencies of countries who are economically footsore, the currencies of economically successful countries appreciate. However, their trees do not grow into the sky. Their companies lose their international price competitiveness. The surpluses in their current accounts shrink. In deficit and surplus countries, the balances are reduced. The risk of sudden non-financeable imbalances decreases. Arbitrary planned economic ceilings, which the IMF and the EU commission repeatedly demand for the balances of the current accounts, are “Grade C“. The market economy oriented solution of flexible relative prices is the first choice. They retain the individual decision-making freedom of consumers, entrepreneurs and voters (politicians).

The EMU is trapped

The exchange rate valve no longer exists in the EMU. Only internal revaluations and devaluations remain. In surplus countries this is not an issue. Sooner or later, rising wages cause real unit labor costs to increase. Here, Germany is currently no exception. Nevertheless, the competitiveness of German companies worldwide has as yet hardly suffered at all. The euro contributes to this. The persistent economic malaise of the periphery in the EMU reduces the strength of the euro against other currencies. This improves the international competitiveness of the German economy in third countries more so than that of other member countries. The balances in the German current account continue to grow. Since 2011 they have been growing particularly strongly in comparison with those of third countries. 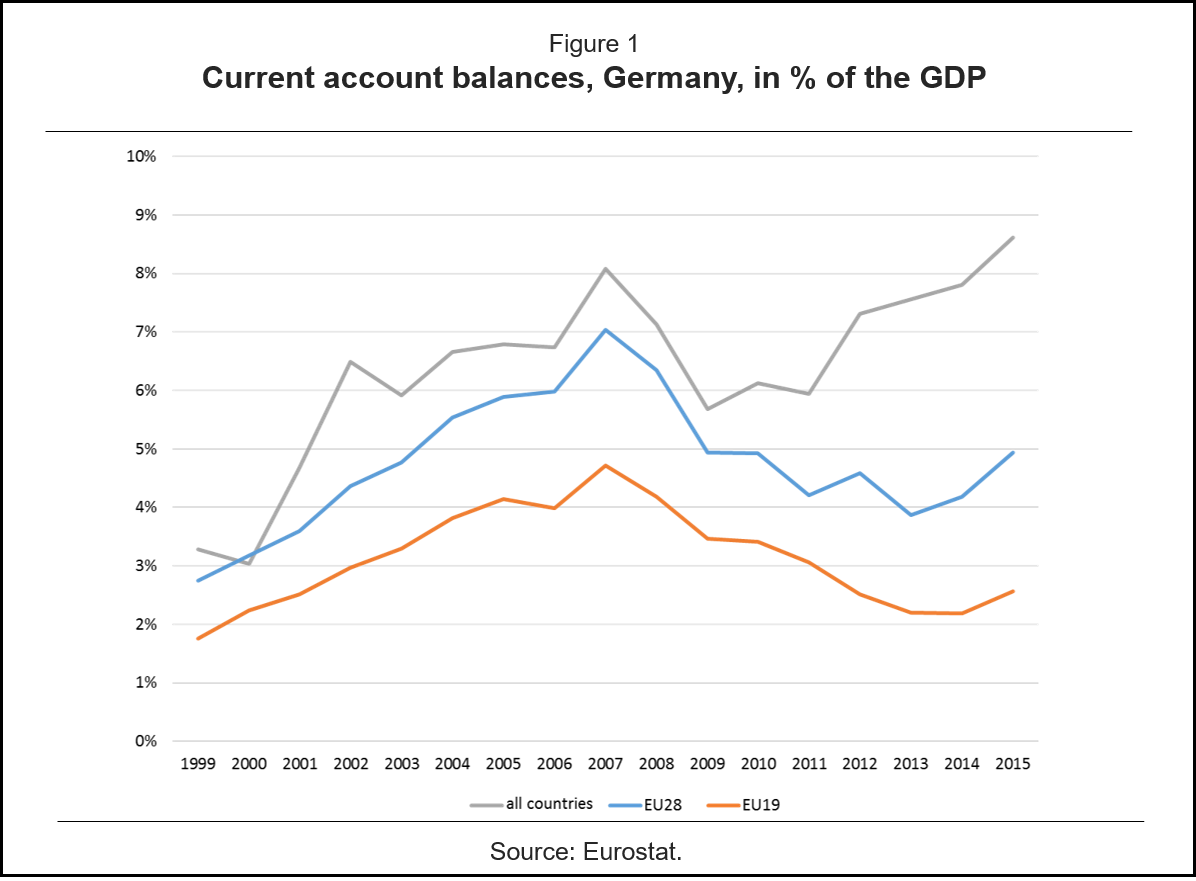 With regard to balances in the current account, it is the deficit countries in particular that must take action. In order to become more competitive, real unit labor costs have to be reduced. Of the two possibilities, “better or cheaper“, they may only take advantage of the second alternative in the short term. However, nominal wages and goods prices only decrease if the channels through which collective bargaining parties shift employment-related burdens onto third parties become clogged. This is not possible without comprehensive structural reforms and consolidated national budgets (austerity). The less that fiscal and monetary bailouts finance deficits in current accounts, the greater the pressure on politics to take this route. The behavior of the ESM and the EZB is not helpful.

The persistent bilateral current account balances in the EMU are also unthinkable without the euro. With the break-up of the Maastricht contracts, the path of internal devaluations was barricaded. Governments suspended the “no-bail-out clause“, the ECB is pursuing an unbridled “monetary fiscal policy“, and countries cheerfully get into debt in spite of the fiscal pact. Structural reforms in the deficit countries have stalled. Traditional sectoral structures become cemented, and “lopsided“ current account balances become firmly established. The deficit countries’ idea of making the surplus countries less competitive is economically abstruse. Germany must insist on a “robust“ Maastricht 2.0. It must once more hold that he who acts is liable for that action. Then the current accounts will function as well.