At the end of last year the four presidents of the most important European institutions showed its true colours regarding fiscal policy. Manuel Barroso (EU-Commission), Herman Van Rompuy (European Council), Mario Draghi (ECB) and Jeroen Dijsselbloem (Eurogroup) propose to provide the Eurozone with its own budget rather sooner than later. This would be the only way to save the European Monetary Union which is still on the edge of the abyss. Economically stronger countries have to financially support weaker members. This applies not only to temporary asymmetric shocks, but is necessary on a continuous basis in case of asymmetric trends. Laslo Andor, the socialist EU-Commissioner for Social Affairs, does not relent concerning these plans for European unemployment insurance. However, constant financial equalisation inside Europe is at present politically inconceivable. Even the camouflaging German bail-out politicians would not be able to pass this on to voters. A temporary financial compensation in the event of asymmetric shocks seems the easier way. By implementing European unemployment insurance, politics would finally make the new world of the economy of transfersÂ´ crooked plane socially acceptable.

Economic change is in well underway. It is a truism: economic structures change. Again and again the focus lies on the sectors. Technological change and globalisation are important drivers for this intersectoral development. Without sectoral changes the engine of economic growth sputters. In rich countries the traditional industrial sector is pushed to the losing path; knowledge-intensive sectors reach the sunny side of economic development. For quite a while now, these factors have also been contributing to the intersectoral evolution. The labour demand structure regarding qualification changes. Cognitive jobs win; routine jobs lose. Inter- and intrasectoral structural change partly contributes to the fact that there are both winners and losers among employees regarding sectors and jobs. Inequality of personal income distribution increases. But economic volatility accelerates again, too. Hence also labour incomes once more vary increasingly.

Employees typically are risk-averse. They donÂ´t like fluctuating incomes. Instead they prefer a constant flow of their income. In exchange they are willing to accept financial drawbacks. In times of high economic volatility their demand of social security increases. Normally, private supply responds to growing demand. Insurance companies offer different variations of protection against fluctuating labour income. This, however, does not apply to fluctuating labour incomes. Companies do try to protect their employees against fluctuating incomes. But this works out only in case of mild shocks. In the event of strong economic impacts this entrepreneurial protection fails. Yet private unemployment insurances are not capable of insuring incomes against fluctuations caused by unemployment either. Obviously, unemployment is a risk difficult to insure. Market solutions are inefficient. A protection against unemployment organised by government is required.

In many countries politics takes over the task of private insurance markets. Almost everywhere unemployment insurance is either organised by the government or guaranteed in another way. The main problem of these insurances is multiple moral hazard. Unemployment insurance creates incentives for employees, employers and collective bargainers to pass on burdens connected to employment policy to third parties. Contributors and taxpayers are the ones who pay. The turbulent inter-and intraindustrial structural change reinforces the problems of free-riding. If cyclical fluctuations dominate, multiple moral hazard is less problematic. It can be limited by lower wage replacement ratios, shorter receiving periods and tighter regulations of reasonableness. Employees, who have been dismissed during recession in a sector, will be reemployed in this sector during recovery. New human capital plays a secondary role. In times of economic downturn, lost incomes are moderated; in times of expansion the financial resources needed during the downturn are generated. The unemployment insurance acts as an automatic stabiliser. 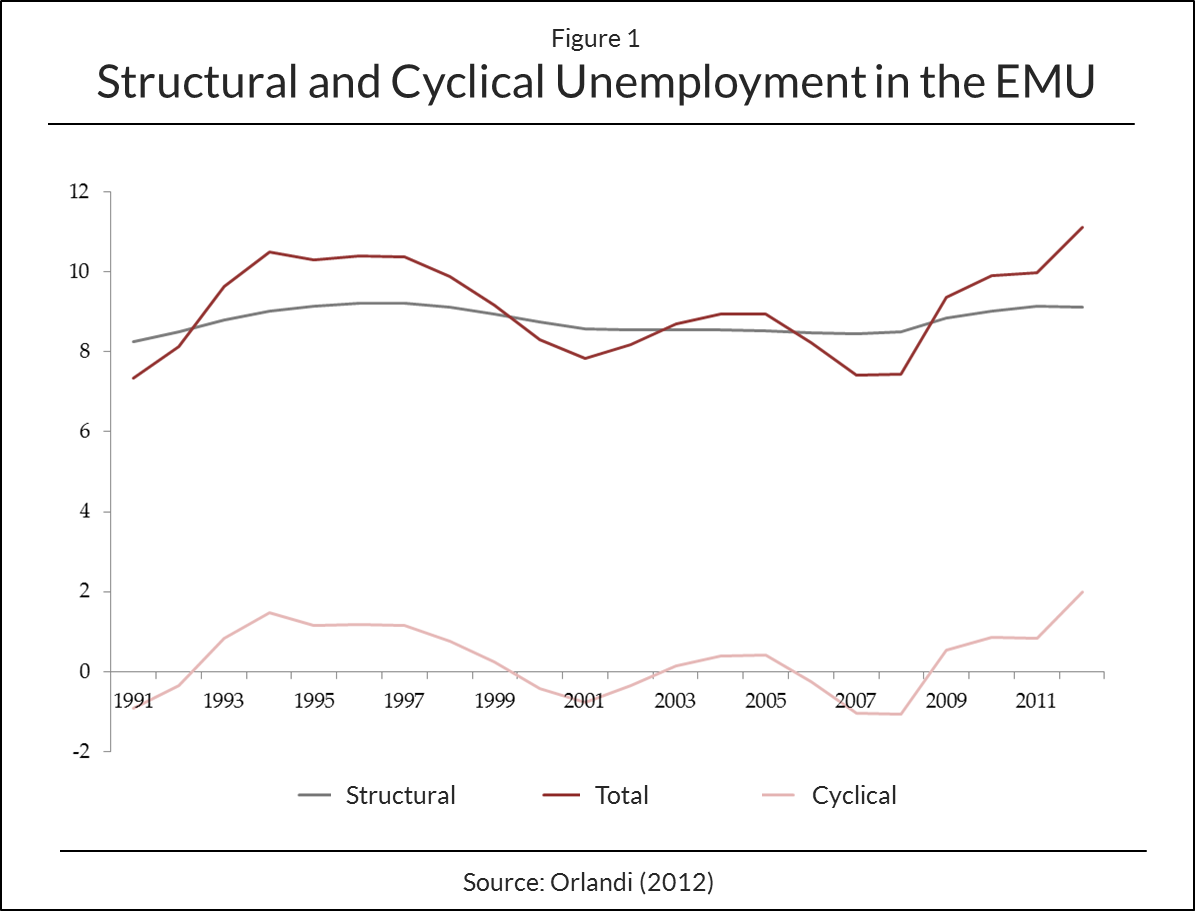 Cyclical fluctuations have actually become less important. Structural factors have long been in charge. This applies at least as regards the countries of the EMU. The Financial and Euro Crisis didnÂ´t change that either. The cyclical component of unemployment in fact has risen more strongly during the crisis. Still, structure dominates economic activity. This makes life even harder for unemployment insurance. It is no longer primarily about bridging times of cyclical unemployment financially. The more important task is to provide the unemployed with skills usable on the market, which they need in other sectors and new jobs. Passive labour-market policy (unemployment benefit) has to limit moral hazard caused by wage policy. This makes labour cheaper, increases employment and human capital “on the job“. Nevertheless, also active labour-market policy (counselling, placement assistance and training) can improve unemployed work. It can create incentives for unemployed to accumulate new human capital usable on the market. In the past, Denmark with its concept “flexicurity“ has shown how it can be done. 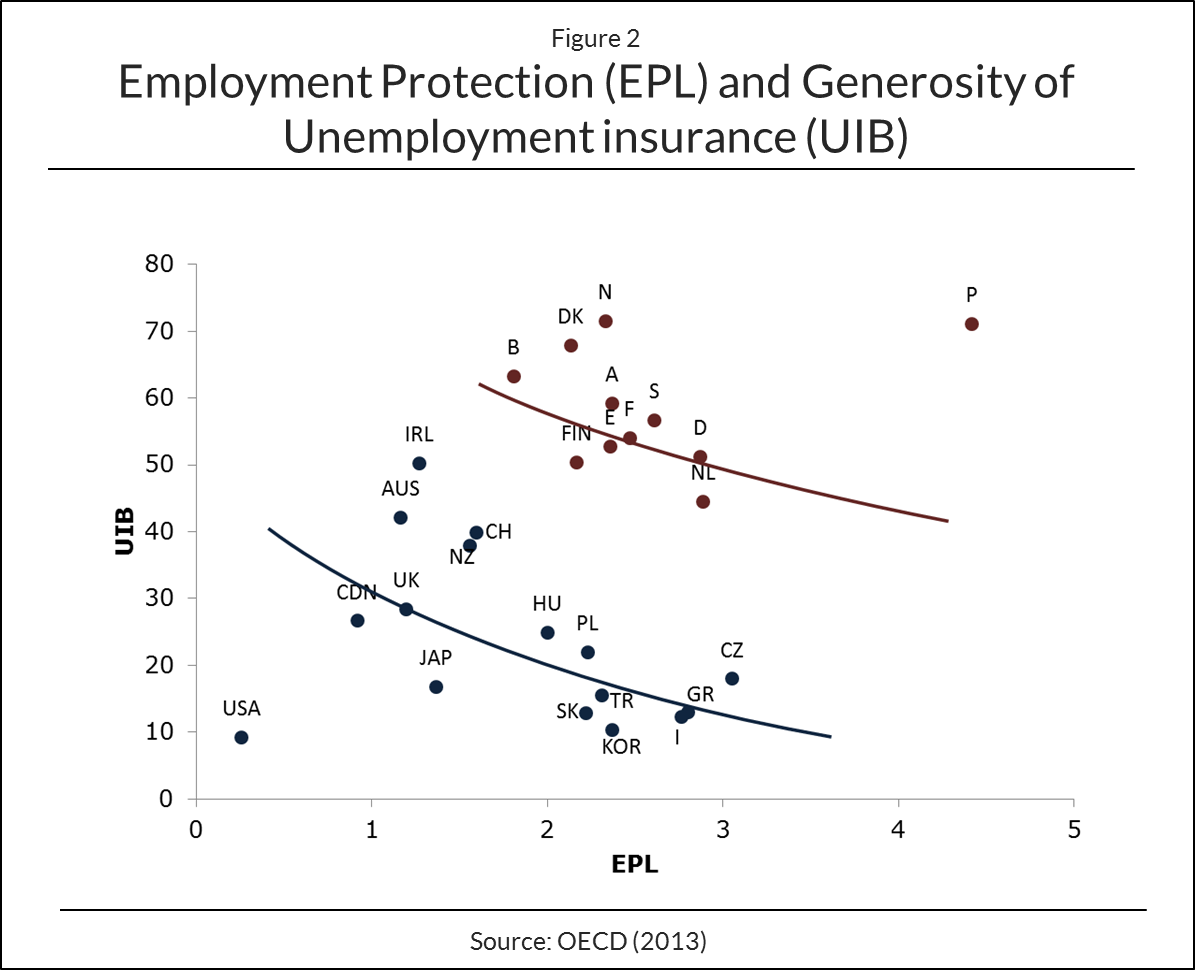 It seems obvious to centrally choose the mix of governmental unemployment insurance and statutory dismissal protection for the countries of the EMU, which delivers the best results on the labour-markets. This conclusion is wrong. The citizens of European countries have the right to make their own decisions. Since their preferences as to efficiency and justice vary, they will choose different combinations of unemployment insurance and dismissal protection. Experience has shown that national decisions which result in increasing costs – growing unemployment and decreasing growth – will sooner or later be reversed. Especially Scandinavian countries like Sweden have reversed its very active labour-market policy decisions at the beginning of the 1990ies. This suggests avoiding that costs of country-specific decisions in the EMU are passed on to third parties by using the mix. Strict, national budget restrictions are required. Central unemployment insurance would be the opposite.

The proposal of European unemployment insurance breathes the spirit of inter-regional financial transfers. A currency union is only stable, if the countries adjust to exogenous shocks through flexible relative prices and mobile production factors. If all else fails, inter-regional transfers can be used temporarily for stabilisation. European unemployment insurance redistributes inside the EMU. In case of asymmetric shocks it works as an automatic stabiliser, in case of asymmetric trends as an instrument of financial equalisation. But this does not make the EMU permanently stable. European unemployment insurance fulfils this task only if it succeeds in getting the hang of multifaceted moral hazard. Only then it is secured that adjustment to exogenous shocks takes place via flexible wages and mobile labour. Unemployment would be confined, structural change wouldnÂ´t be restrained, inter-regional convergence accelerated and the EMU stabilised. Should this fail, the destabilising forces of inter-regional financial transfers will gain the upper hand.

The idea of European unemployment insurance is not bad per se. It could yield a double dividend. On the one hand, if the insurance covers all Europe, an efficient spreading of risk would be possible. A cheaper price/performance ratio would be feasible. This is at least conceivable if asymmetric shocks dominate. However, this is not to be expected with growing dominance of the intra- compared to inter-industrial trade. In future, shocks will be more likely in line. On the other hand, the automatic stabiliser of European unemployment insurance could come into effect. Regions with stronger demand shortfall would be supported by regions with less strong demand shortfall. Cyclical economic downturns in Europe can be moderated. At the moment, however, not cyclical but structural factors dominate. This is clearly illustrated by the decomposition of the unemployment rate in figure 1. Yet unemployment insurance cannot solve structural problems, it cements them.

There is concern that the European unemployment insurance intensifies the moral hazard of collective bargainers. With such insurance the financial burdens of unemployment can be distributed easier beyond national borders. It becomes more tempting for collective bargainers to think less about the consequences for employment when they negotiate collective agreements and wages. The mechanism of internal appreciation and depreciation through regional, sectoral and qualification flexible wages is obstructed. And this development is slightly exacerbated by something else. Europe increasingly suffers from asymmetric trends. Differences in unemployment between countries and regions have hardened. This is due to institutional deficits on goods and factor markets. European unemployment insurance would degenerate into a form of financial equalisation. Financial redistribution from better regions to worse ones takes place continuously. Incentives for worse regions to pull themselves by its own bootstraps decrease. Greece would soon be everywhere. 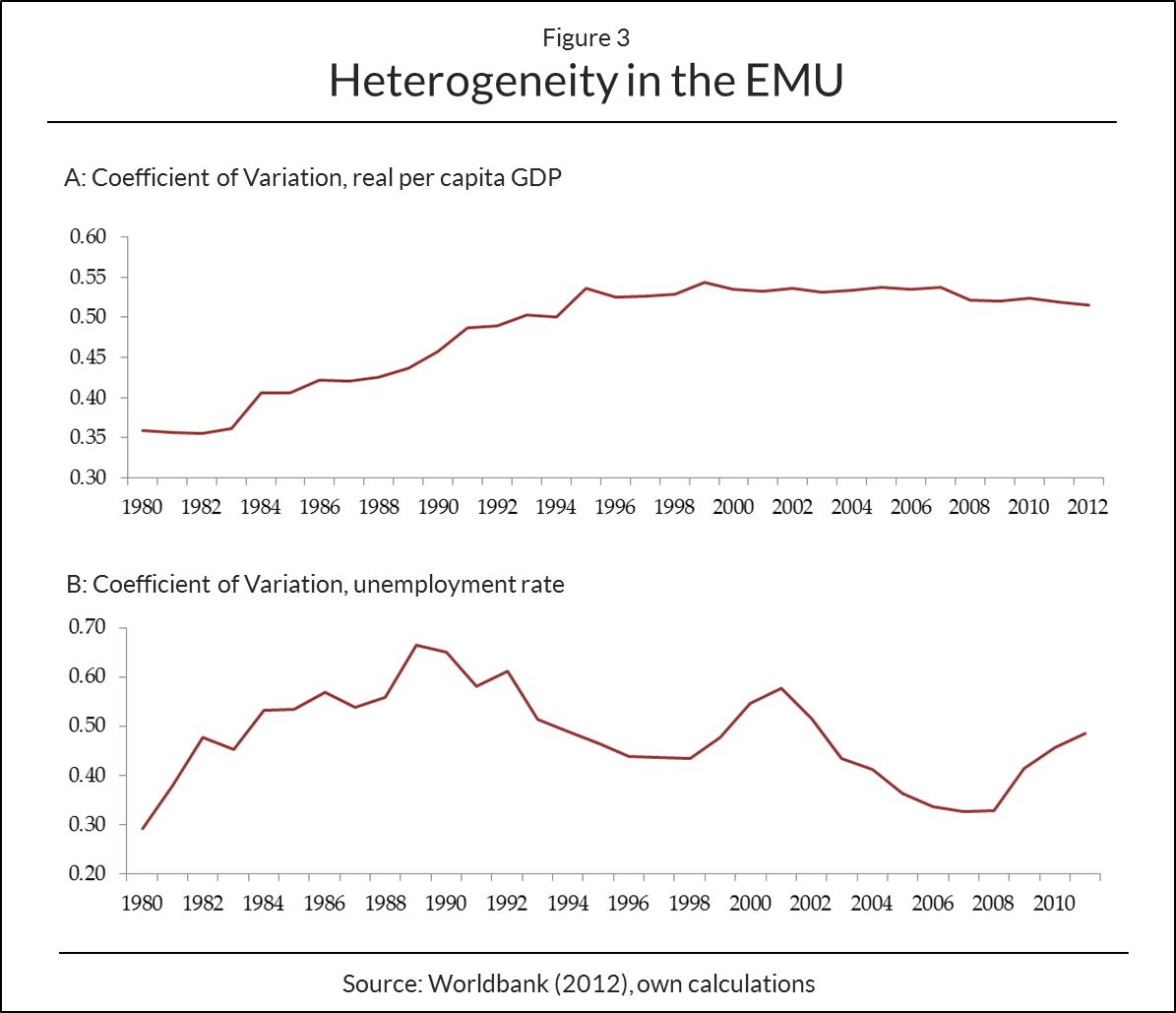 All this does not indicate to bet on central unemployment insurance. This wouldn’t measure up to the regional heterogeneity of labour-markets. In addition, the possibility to learn from the best in labour-market policy would be taken away from political actors. Indeed, unemployment insurance everywhere in Europe is organised differently. It varies in amount of wage replacement ratios, duration of benefit payments, regulations of reasonableness and regarding active labour-market policy. It is stupid to turn off the institutional competition as an incentive for innovation by choosing standard European unemployment insurance. Instead, a reform of unemployment insurance, which reduces multifaceted moral hazard of employees, firms and collective bargainers, is needed. Core elements are the separation of insurance and operative business, increased competition in the field of counselling, and the involvement of employees, employers and labour unions in risk equivalent financing.

Politics wants to save the EMU at all costs and any possible means. Particularly inter-regional financial transfers are the measure of first choice. However, fiscal and monetary bail-outs are reaching a limit. Hence, the idea of European unemployment insurance comes just in time. Its inter-regional financial transfers should stabilise the EMU. This path would have the advantage for bail-out politicians that funds could flow both automatically and almost silently from the few donor to the many recipient countries. Politics could avoid the growing criticism of the rescue mechanism in the North and South. However, European unemployment insurance would further cement the structural problems on European labour markets. The gate for a permanent European financial equalisation would be opened further. Growth inhibiting effects would increase unemployment, obstruct structural change and hinder the process of regional convergence. National parliaments would further lose influence. The EU-Commission would get one step closer to its goal to obtain the key to European funds.