It is not constant struggle that is the sign of healthy competition, but diversity. (Michael Rothschild)

The European Union is in bad shape, both economically and politically. For a while now, economic growth has trickled to a halt not only in central states, but in peripheral countries, as well. Member states are moving further apart in terms of prosperity and it seems even the slightest convergence is few and far between. The unemployment rate is hitting record highs and it is predominantly young people who are being affected; younger generations in Southern Europe are more or less losing the prospect of a secure future. The middle class is shrinking and poverty is growing. This, of course, is not only true for crisis states. Indeed, the collapsing euro is a sword of Damocles that hangs over all, threatening every member state with an economic and political meltdown. It’s no wonder that public approval of an increased Europe is shrinking, while the name Brussels has become nightmare-inducing for some. National, regional and local issues have begun to dominate again while Europe’s relevance is being called into question more often.

Division of Power in Europe: The Ideal

Vertical efficiently-distributed competencies are an essential component of economic recovery in the European Union. The theory of fiscal federalism[1] aims to give adequate instructions on achieving this, but the principle of subsidiarity is a popular alternative. In the European Union, this principle plays a big role, at least on paper. The idea is simple: within the European Union, the state should be involved in areas in which it may be most effective. Â This is not as simple as it sounds. Subsidiary activities must first be subject to two conditions. First, it must be determined if governmental action is needed. This is only the case if state market-based solutions are actually superior. Only then can the level of state involvement be decided. This first step is usually not taken seriously, not even in the European Union.

The widespread impression is correct: in the European Union, competencies are not vertically distributed efficiently. The principle of subsidiarity is often turned upside down.[2] The question of what level of government should be responsible for economic policy is determined by two indicators: spillover-effects and government economies of scale on the one hand, heterogeneity of individual preferences[3] and learning from the best[4] on the other. If economic policy does not only affect a single region or country, but instead causes widespread regional and transnational effects, there is a need for stronger centralization. Decentralized solutions are usually called for if citizens in these regions and countries prefer heterogeneous economic policy.Â  These differences of opinion may be expressed by the fact that economic goals are weighted differently, but it is also conceivable that they rely on alternative means to achieve certain economic goals. 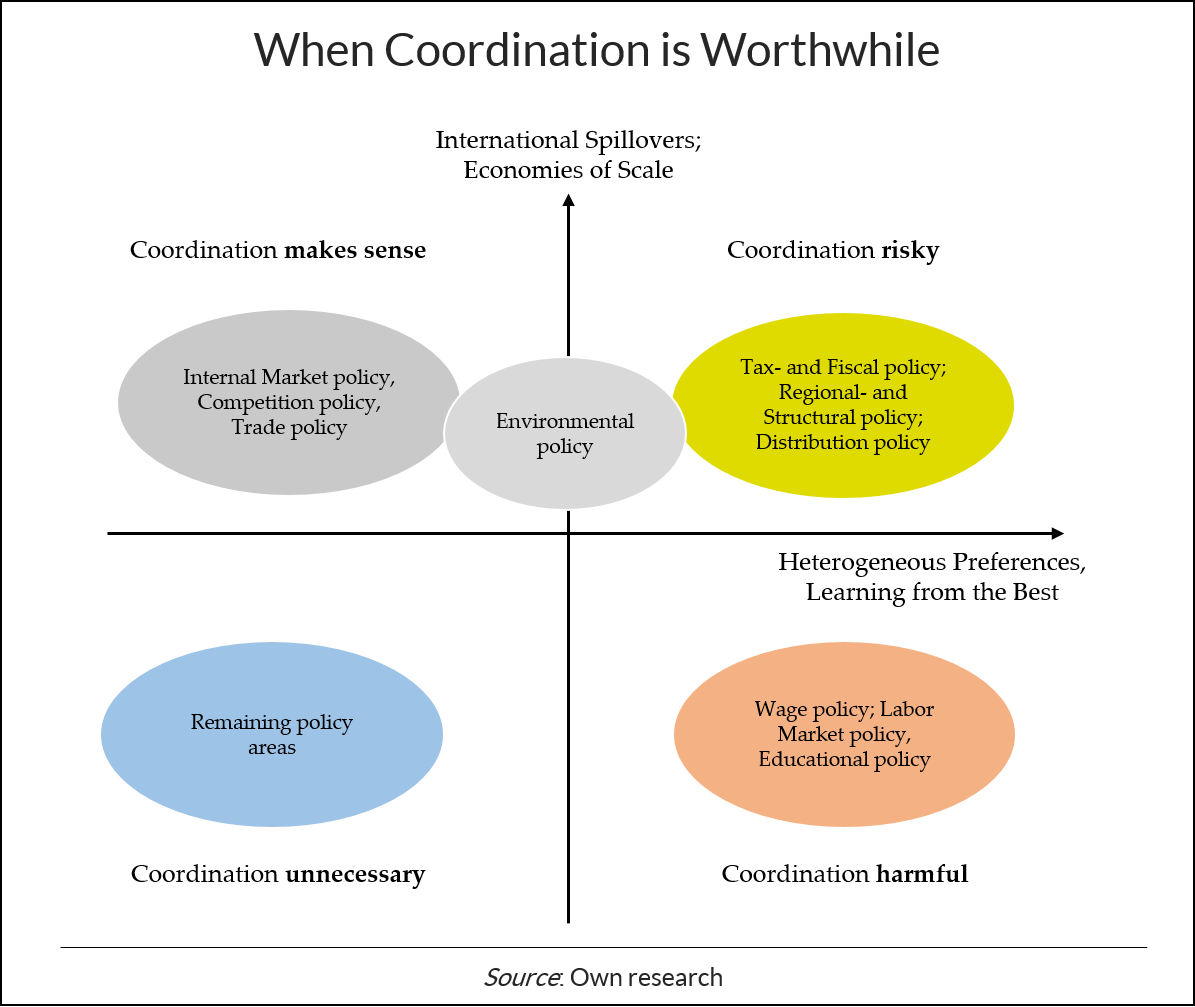 The north-western quadrant indicates that there are policy areas where centralization seems to make sense. On one hand, political activities affect the entire European Union; on the other hand they are viewed as largely uncontroversial. This applies to trade and competition policy, as well as environmental policy, if environmental damage spreads throughout Europe. A decentralized policy is; however, useful when the environment is polluted on a national or regional level. Policy areas in which greater centralization is the least risky are located in the north-eastern quadrant, among which are tax and fiscal policy. The efficiency gains that come with competition in this field and the taming of a Leviathan prevent negative distributive effects. A centrally organized regional and structural policy is also risky. If used for inter-regional distribution, though, it makes sense. Allocative efficiency losses preclude presumptuous conservative structural policy

The south-eastern quadrant demonstrates the political areas in which greater centralization is harmful. Positive spillovers and economies of scale are rare whereas the individual preferences are widely spread. This applies to job market policies and wage policies, which has not always been the case. The days of relatively homogenous job markets are long gone; globalization and technological advancements have changed the face of job markets, making them increasingly heterogeneous. This is true of sectors, regions, and qualifications. A wage and tariff policy that lumps everything together is clearly counter-productive. Instead, decentralized operational and professional solutions are necessary. Job market policy is not a suitable candidate for a stronger European centralization as our knowledge of efficient solutions in this field is simply too modest. Different regional and national job market policy experiments provide us with new insights that would be lost if central solutions were put in place.

Division of Power in the EU: The Reality

The best way to vertically distribute power in Europe depends on the strength of regional economic policy spillovers, state scale economies, and the heterogeneity of individual preferences and institutional competition. Above all, globalization and technological advancements continue to change these conflicts of interest. Decreasing costs of economic transitions contribute to the fact that countries are becoming increasingly economically intertwined. Whether they increase the need for coordinated economic action is rather questionable.Â  It is, however, undisputed, that the preferences of citizens in the European Union have become more heterogeneous. The ongoing debate over the “4 worlds of capitalism“[5] shows that European citizens do not want a uniform economic and social policy. The various enlargements of the European Union gather increasingly diverse interests together under one roof and decentralized solutions are the appropriate response to this greater amount of heterogeneity. Countries and regions are even demanding more political and economic autonomy.

Little of this is felt in the European Union. The process of decentralization is clearly still in full swing[6]. A look at the development since the Treaty of Rome until the mid-2000s shows a clear picture[7]. The trend towards centralization remains strong. During this time, competencies have not even been partially shifted in a single policy area. The trend remains: more Europe, more centralization, which is surprising. After all, there has been a change in integration strategy in the last 50 years. The original idea of integrating markets “from above“ was a complete failure. The best example of this is agricultural policy, but that lesson was learned after the European Single Market in 1992. Integrating “from below“ should theoretically help open markets and the resulting competition between regions should make Europe competitive. With the “Lisbon strategy,“ leaders wanted to continue on this path and make Europe the most competitive region in the world. This did not succeed. 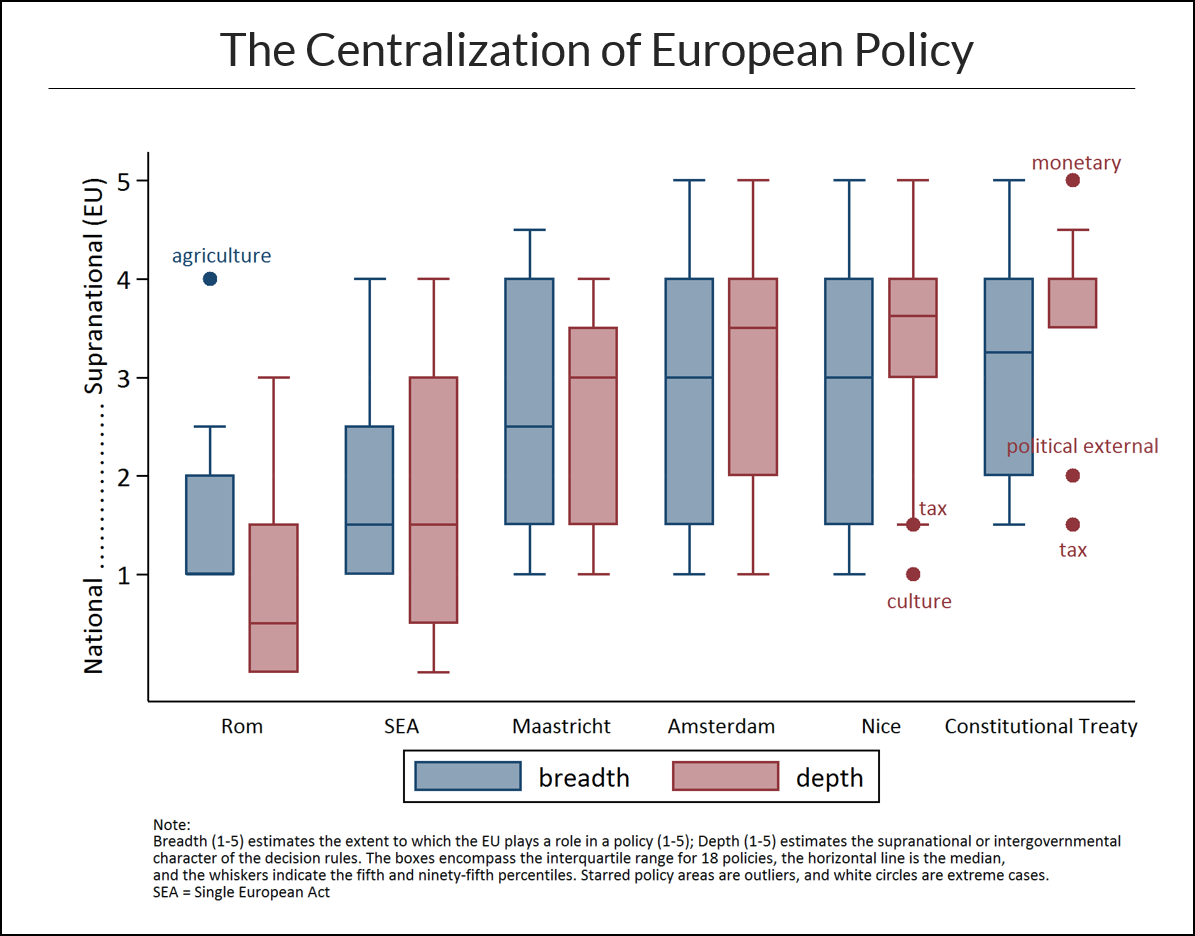 Even if seems different at first glance, the “Lisbon-Strategy“ set the course for a completely different regulatory policy in the European Union. The “Open Methods of Coordination“ in the so-called “European Employment Strategy“ is merely an instrument of camouflage and centralization. The European Commission, the European Council, member states and the Council of Ministers set a process in motion that favors decentralized reforms, even where competencies clearly belong to the respective countries. They should all learn from one another how to best solve problems. An institutional competition does get underway, which is good. “Open Methods of Coordination“ should take care of what markets are unable to achieve. However, this way has more than one minor flaw. All those involved, as well as relevant interest groups, set common objectives and recommendations for action. This maps a way for harmonization and centralization in the European Union. Above all, the European Commission is attempting to use this as a way to be actively involved in areas in which it has no power.

The new “Europe 2020 Strategy“ makes apparent the planned turning-point in regulatory policy. Since then, it is not diversity that stands at center stage in Europe, but unity. The philosophy of the “European Single Market“ of 1992 has served its purpose. Competition has been tossed aside. The illusion of a unified “European Social Model“ has now become the focal point. The process of centralization in the European Union will be continued as planned, with the European Commission already having announced its intention to exert more influence in the fields of education, the environment, and social cohesion. The “Open Methods of Coordination“[8] are the preferred instruments. Clearer aims from the Council and Commission, more political control and concrete sanctions are elements of the new strategy. Member states influence will be limited, with countries relinquishing de facto even more powers to Brussels. The principle of subsidiarity will thus be worn down even further, and a new intensive push for centralization will be imminent.

The recent finance and euro crises have only strengthened the tendency towards centralization. It is debatable whether this trend is sustainable as the European Union is far from having a single “social model.“ Europe is too diverse; preferences vary too wildly. At least four different “worlds of welfare“[9] can now be identified. All differ in how they solve the conflict between allocation and distribution. Anglo-Saxon countries put more emphasis on allocative efficiency, rather than distribution. On the continent, it is just the reverse. Mediterranean countries can be called neither efficient, nor “fair,“ while the Nordic nations are successful in both areas. They have a relatively efficient allocation and a rather fair distribution. Should the Commission centralize too much, there will inevitably be conflict[10] among the countries in the different “worlds of welfare,“ which should slow down the process.

It is not a good idea to put Europe on a central map. Although the European Commission and the bureaucracy in Brussels may favor it, there is certainly no love for centralism in the hearts of the people in Europe. A centralized Europe is entirely too far from the increasingly heterogeneous preferences of local citizens. The real economic powers are communities and regions and they must win in the fight for international mobile factors. In order to do so, they need more economic room to maneuver. Furthermore, efficient results can only be expected if there is accountability in politics. All of the above supports the idea of competitive federalism in Europe, which is only possible if competencies are allocated both vertically and clearly and inter-regional financial equalization is limited to emergencies. Additionally, an insolvency statute must ensure the possibility that countries, regions, and communes within Europe can also go bankrupt. Only then does Europe, despite the unpopularity of the euro, have a chance to live in peace, freedom and diversity.

The present work is a selective summary of an article appearing in first issue of “Wirtschaftspolitischen Blätter“ (2014).

Eine Antwort auf „The Future of the European Union: Competition or Centralization?
Europe has gone too far“