“Economists exert a minor and scarcely detectable influence on the societies in which they live.“(George Stigler)

The mess in the European currency area continues, and the Euro isn’t out of the woods yet. The three trouble areas infecting one another continue to smolder: a number of countries in the EU continue to be less competitive, debt is once again too high almost everywhere, and many banks are still undercapitalized. The threefold crisis in the Eurozone is being driven by multiple “moral hazards“, those of the politicians, voters and bankers (here). They had their beginnings in the periphery, in the PIIGS. The (German) center and the ECB saved the EMU from the collapse. This interpretation of the euro-crisis is, however, becoming less important and is held less and less commonly in politics and the media. The attempt to gloss over the story of the crisis is made much more often. The victim is now the periphery, and Germany in particular1 is the culprit. “Germany-Bashing“ is meanwhile fashionable throughout Europe. Even American economists, like Alan Blinder and Paul Krugman, take part in the witch hunt against an “aimlessly wandering“ Germany.

The charge against Germany is based essentially on three points: Germany is too competitive, not inflationary enough and much too saving. German current account surpluses are not only a thorn in the side of the periphery in the EMU (here [4]), they are met with disapproval in the USA as well. The surpluses are said to bring Germany more income and employment while negatively effecting countries with current account deficits. This would be particularly true in the EMU for the periphery countries. It is suggested that their economic growth suffers, unemployment is once more on the rise and tensions are once again increasing in the EU. This “Vampire-Economy“ is said to be based on universally harmful politics of “beggar my neighbor“. For a long time, wages in Germany have failed to keep up with increases in labor productivity. With this Germany procures for itself unfair advantages of price competitiveness in Europe and around the world. Numbered among the victims is the periphery of the Eurozone. The EMU is understood as being unable to save itself unless Germany becomes “more expensive and worse“.

As a further charge against Germany it is declaimed that it isn’t ready to accept a higher rate of inflation. Those in the EMU who have lost their price competitiveness can only recover it through an internal devaluation. The instrument of external devaluation is no longer at their disposal. Downwards less flexible wages, however, block this mechanism. With the exception of Ireland, the periphery of the Eurozone has not achieved sustainable progress along this path. Germany should be able to help by accepting a significantly higher rate of inflation than that of the less competitive member countries. Wages which increase more strongly than productivity would be helpful. It would also be a great help if Germany were ready to accept a rate of inflation in the EMU of more than 2%. This would reduce the pressure in the European periphery and elsewhere on the need for less-strongly-increasing or even sinking money wages, the realization of which would be difficult to achieve politically.

Finally, Germany is accused of being far too saving. For a long time Germany has saved more than it has invested domestically. A German export surplus of capital and continuing deficits in the current accounts balances of the periphery are therefore seen as unavoidable. Meanwhile, in drawing off other important jobs, Germany throws open the doors for the “Vampire-Economy“. Higher wages and more private and public investments should therefore be required of Germany. The eager demand in Germany would increase. By increasing imports Germany would help its partners in the EMU. On top of that, Germany also practices a policy of constant austerity. Although it (thank god) violates the 60% debt limit of the Maastricht Treaty, it does (unfortunately) keep to the 3% deficit threshold. A “break even“ in the national budget would be counterproductive. The German government spends too little, and is no engine in the EMU. In this way Germany harms the others and the EMU.

Germany has learned from the persistently high unemployment after the reunification. Appropriate steps towards structural reform of the labour market were instituted with the “Agenda 2010“. More important, however, was a more decentralized, firm-level wage- and collective bargaining policy and company alliances for work. Both activities improved the international competitiveness of German firms. Germany understood the logic of the EMU more quickly than others. Asymmetrical stocks require relatively flexible prices in the labour markets (here). Throughout Europe, survival will only be possible with a strategy of “better or cheaper“. The economic laws of competition also apply worldwide. German firms only survive in the world markets if their products are better or cheaper. This isn’t a mercantile “beggar my neighbor-politics“, rather it follows the logic of international competitiveness. Those who are quicker to implement it are rewarded with higher prosperity. The current account surpluses are, however, a temporary phenomenon and will soon reach their limit. 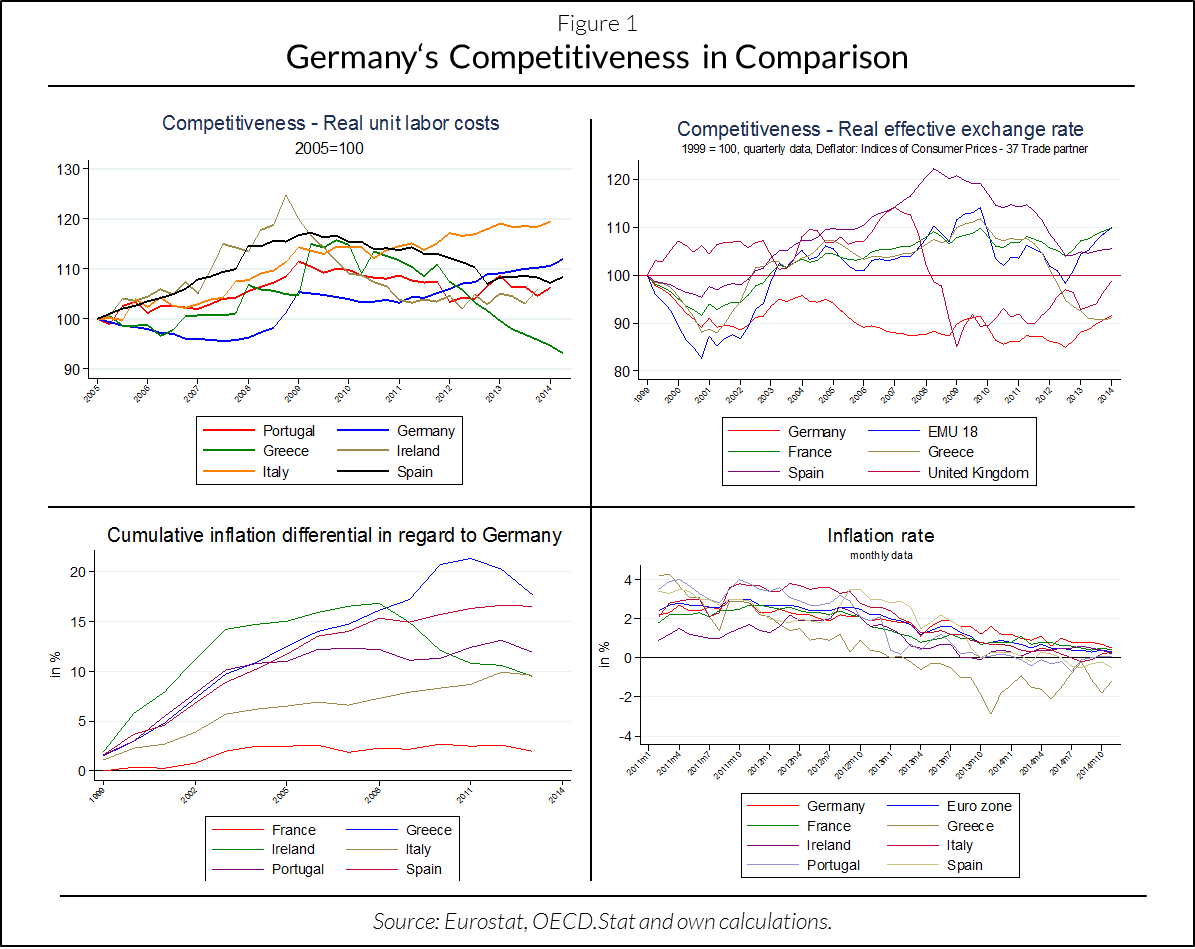 The surpluses in German current account balances are actually being incurred only minimally as a result of trade with EU countries. They arise primarily from economic relationships with the rest of the world. Additionally, in a currency union the “disequilibria“ in the current account balances are not set in stone, rather are at most a temporary condition. One must, however, allow the market forces to operate. In Germany they are emerging. The output gap has disappeared and wages have for some time now been increasing faster than in other parts of the EMU. Sooner or later the cost of goods will also rise more quickly here than in the rest of the Eurozone. It is indisputable: Germany revaluates internally. Meanwhile, however, the market forces in the periphery are being thwarted. Here a (small) output gap does, however, push the cost of goods and help countries to become more competitive. They devaluate internally. With a super-expansive monetary policy the ECB is attempting, however, to block this channel. It justifies its politics as being motivated by the fear of Europe-wide deflation. In fact they are saddling Germany with an even greater burden of adjustment. 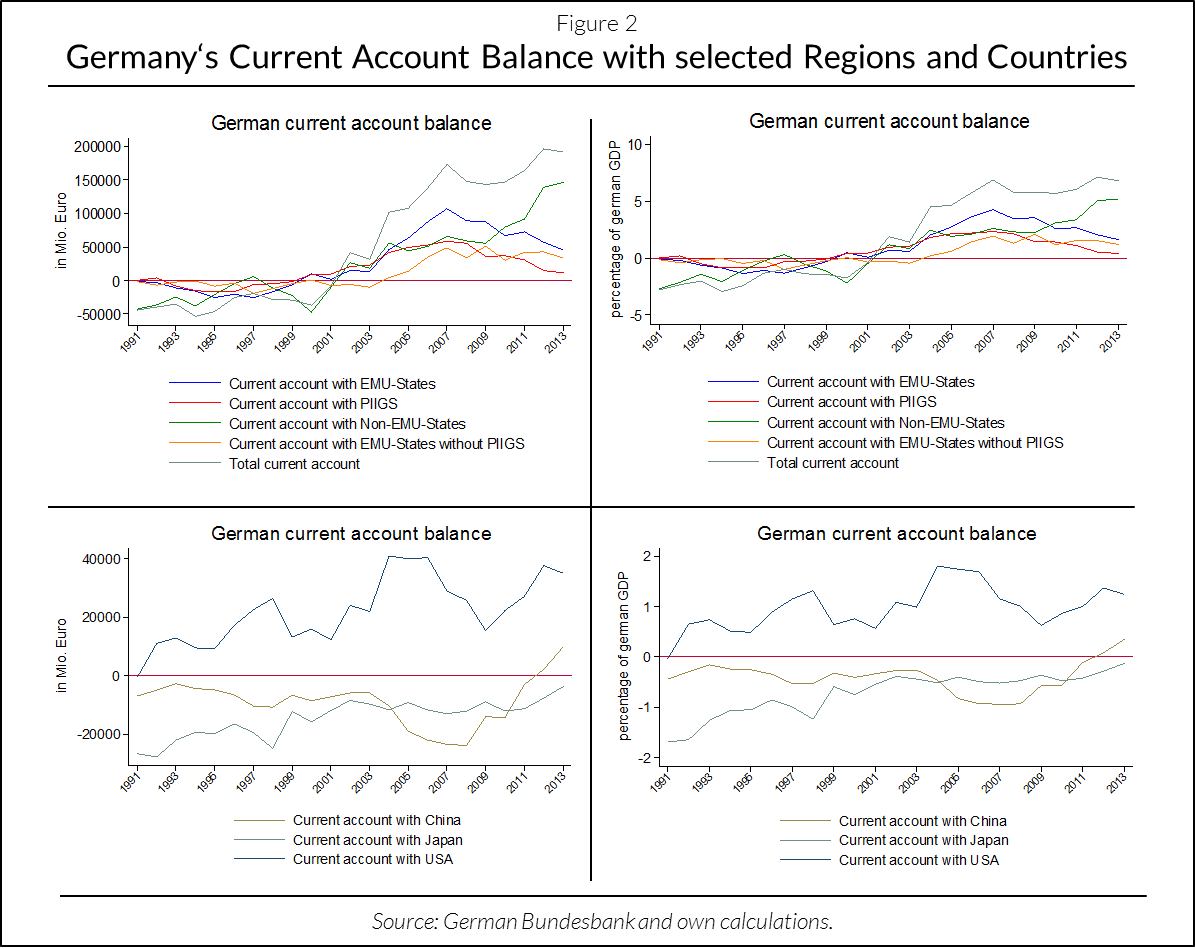 The charge that Germany pursues a policy of continued austerity is unfounded. Government expenditures in Germany have not fallen in past decades, rather were constantly on the rise. They have largely kept pace with GDP growth. The government size has changed little since the outbreak of the euro crisis, with no evidence of the effects of austerity. The claim that Germany should go further into debt and invest more in order to assist the others is misleading. More debt-financed government spending hurts Germany and wouldn’t provide the EMU with a leg-up. The potential beneficial effects are negligible due to low intra- and inter-regional multipliers (here). There can also be no question of a serious “investment gap“ in Germany (here). This applies to both private and public investment. The current “investment mania“ is lacking in economic substance, and will only result in more money being wasted again.

The Mediterranean lawsuit against German misconduct is largely unfounded. There is nothing to suggest that Germany’s conduct was detrimental to the other members of the monetary union. The EMU can only function if the members are constantly striving to become more competitive. Structural reforms in a currency union are a never-ending task. This is especially true for the labor markets. There all have shortcomings but the Mediterranean countries in particular. Although the crisis countries have made some considerable efforts since the crisis’ begin, sclerotized labor markets are still their main Achilles heel. They have not been successful in implementing the key elements of the strategy of “flexicurity“ (here). Stricter employment protection is still segmenting labour markets, the concept of “encouraging and claiming“ is still shaky, and collective bargaining policy is still too little firm level related.

The judgment of German fiscal policy is, however, ambivalent. With the debt ceiling for federal and state governments and a policy of “break even“ it is on the right track. Sound fiscal policy is the basis for sustainable economic growth. Historical experience shows that monetary unions fail because of unsound, monetary funded government budgets. A solid German fiscal anchor stabilizes the EU. However, the “sociopolitical generosity“ of the grand coalition deserves a scolding (here). With a retirement age of 63 and a higher pension for mothers it burdens future generations. Minimum wages and rent caps destroy the market-based pricing mechanism, the core of the market economy. Incentives to invest in Germany decrease further and economic growth suffers. This does neither Germany itself nor others in the EMU a favor. Otmar Issing is right: Germany should not receive criticism for spending “too little“, but is guilty of recklessly squandering the gain of past reforms (here).

It is not to be dismissed out of hand that Germany has a stronger preference for price stability than others, and that’s a good thing. The inflation attitudes in the EMU are very heterogeneous, and have a significant Mediterranean bias. As experience shows, they never actually manage to inflate away real adjustment problems. The lack of international competitiveness can therefore not be restored in this way. If one decides to follow a politics of inflation, it leads to the risk of further allocative distortions. What is necessary is the lowering of real absorption. This is only achievable through a strategy of “better or cheaper“. However, a higher inflation rate is also unpleasant from a distributive point of view. The inflation tax is the most unjust of all taxes, a thief of the ordinary people. Germans will not endorse this inflation strategy. If the ECB raises and locks in the inflation rate at the target level of 2%, the general price level in Germany must increase by more than 2%. This is then a litmus test for the Germans, in how they deal with the euro.

Germany is still the paymaster of the European Union. It is also increasingly the whipping boy for the footsores in Europe. The indictment reads: Germany destabilizes the Eurozone with its economic policy; it must be less competitive, increase government spending, and let go its fear of inflation. Germany, however, does not make a good scapegoat. In Europe there is no longer a “Keynesian“ moment, rather the economic malaise is “(neo) classical“. This is not the time for concerted European demand policy; it is the time for better national supply conditions. Debt-financed government demand and a hyper-expansionary monetary policy have never been able to generate sustainable economic growth. At most they ignite a flash in the pan, prevent necessary (structural) reforms, and lay waste to a sustainable monetary system. Comprehensive structural reforms, sound fiscal policy and a credible policy of price level stability are the ingredients of a meaningful policy. Germany shouldn’t act as a bad model.