“The road to hell is paved with good intentions. “ (Bernard of Clairvaux)

The current crisis regarding the European Monetary Union is a crisis of competence distribution.Â Â  This much is clear when one considers the fact that the Euro is experiencing a threefold crisis: banking, governmental debt, and balance of payments are all plaguing the EMU at the moment. Far too many players have their hands in the pockets of others, “moral hazards“ are occurring more frequently[1], and competences are becoming blurred. Despite the Fiscal Pact and the ban on bailouts, member states are now caught in a joint liability community. But if theoretically all are equally responsible for everything, then in actuality no one is liable for anything, resulting in only “soft“ budget restrictions of economic and political actors. The incentives for voters, politicians, banks, and collective agreement partners to economically kick over the traces are large. What’s more, voters and politicians in the EMU are tempted to operate at the expense of others and there are strong incentives for banks to privatize profits and hold states hostage for losses. Social partners are also susceptible to the appeal of passing off employment burdens to third parties.

Competences in the EMU

The future of the European Union depends entirely on the survival of the European Monetary Union. The euro only has a chance if important fields of economic policy are decentralized[2]. Vital to the survival of the EMU are vertically distributed competences which do not blur responsibilities, but instead clearly allocate them. The current blueprint of the EMU is simple[3], but risky. An excessive political interest in a common currency, the brushing aside of existing economic disparity, and heterogeneous national economic and political interests led to the suicide mission of a “currency without a state“ (Padoa Schioppa).Â  The economic concept behind the EMU has two main points: 1) monetary policy alone is centralized. All other economic fields remain at the national level. 2) The assignment-problem is addressed: The European Central Bank is responsible for price level stability, while agreement partners focus on employment and the state produces public goods.

On paper, economic competences in the EU are clearly defined. The danger of a fiscally-driven inflation should theoretically be circumvented by fiscal safeguards. However, the Stability and Growth Pact and the bailout ban have not held their promises; it remains to be seen if the fiscal pact will actually perform as intended. Â The systemic significance of banks and states has swept away the warning signs of excessive state debt and fiscal rescue funds have turned the EMU into a joint liability committee. Furthermore, the European Stability Mechanism has effectively led to the installation of a transfer union and the establishment of the Target2 payment system by the European Central Bank is little more than a monetary rescue package. The ECB has also pulverized the ban on monetary state financing. By purchasing securities of crisis-ridden states, the ECB is actually financing state debt via the currency printing press. Clearly action and accountability are collapsing in the EMU and being replaced by organized irresponsibility.

The economic concept behind the EMU has yet another important consequence that receives far too little consideration. The wage and collective bargaining policy bears the main burden of members’ adjustment to asymmetric shocks[4]. With a uniform, stability-oriented monetary policy, monetary instruments have lost their edge as efficient fiscal guidelines limit the effectiveness of fiscally oriented national activities. While the reduced monetary and fiscal strength is not a loss in supply-side asymmetric shocks, asymmetric demand-side shocks are different. Economic actors have to adjust to asymmetric shocks, either through flexible national and regional unit labor costs or through geographically mobile work. Labor mobility in the EMU is still low[5] due to a combination of national wage and collective bargaining policies, an active and passive national labor market, and national education policies.

In the EMU, economic actors must adjust to asymmetric shocks with “internal” appreciation and depreciation. However, this instrument of flexible unit labor costs is only effective if regional labor markets are functional, which currently only seems to be partially true. Since the beginning of the euro crisis, unemployment in the EMU has only moved in one direction: continuously upward. There is also no indication that the regional distribution of the unemployment rate will improve. On the contrary, it has risen strongly since the outbreak of the worldwide financial crisis in 2008. Regional, sectoral and professional wages structures are simply not sufficiently flexible, and work is neither geographically nor professionally mobile enough. As before, labor markets in the EMU countries are in a desolate condition. Long term unemployment is gaining around again, with young generations in southern European countries essentially losing all prospect of a secure future. Germany alone remains an exception.

How efficiently actors on the labor market respond to (asymmetrical) shocks depends the hardness of budget constraints. The more difficult it is for agreement partners to shift employment expenses to third parties, the harder the restrictions are. If the ECB follows a credible policy of price level stability, then it is hardly possible for agreement partners to pass the burdens, which stem from exogenous shocks, on to consumers via the monetary channel of inflation. The credibility of the ECB after public financing will be revealed when it comes time to collect cheap money. A credible no-bail out clause that hinders a joint liability community can constrict the fiscal channel.Â  In this way, it is difficult for agreement partners to pass economic policy burdens on to future taxpayers through the fiscal railway that is state debt and the pressure to adjust with flexible wages and mobile work remains.

Social security systems that are financed through a higher degree of contribution equivalence are an important step towards more functional labor markets. Contributory redistribution activities would barely be possible if contributions and services were to correspond to one another. Systems of social security such as pension, health-, and unemployment insurance would no longer be able to be used as a marshalling yard for employment policy burdens. The “social“ channel, through which burdens are passed on to third parties, would be blocked. Another key institutional innovation in labor markets is decentralized wage and collective bargaining. Settlements that are too high lead directly to unemployment, but with company agreements, social partners are able to focus more on a company’s individual earnings. This makes budget constraints for agreement partners “hard“ and prevents employment burdens from being shifted to a third party via the collective bargaining channel.

With the implementation of the euro, a new European dimension has been added to the channels of burden shifting onto third parties. It is essentially now possible to not only burden national, but also European “third parties.“Â  This circle of third parties has been expanded due to a number of factors: the ECB’s stronger inflation oriented monetary policy, a fiscal joint liability community in the EMU, and a European social union or European wage and collective agreements. A vertically efficient distribution of economic competences would provide remedy and block these channels. However, this is certainly easier said than done. The economic theory of fiscal federalism identifies two groups of indicators of an optimal vertical distribution of competences: cross-border spillovers and economies of scale on the one hand, heterogeneity of preferences and learning from the best on the other hand.Â  Should the first group of elements dominate, a greater degree of centralization in labor market policy is called for. If the second group of elements plays a greater role, decentralization would be more beneficial. 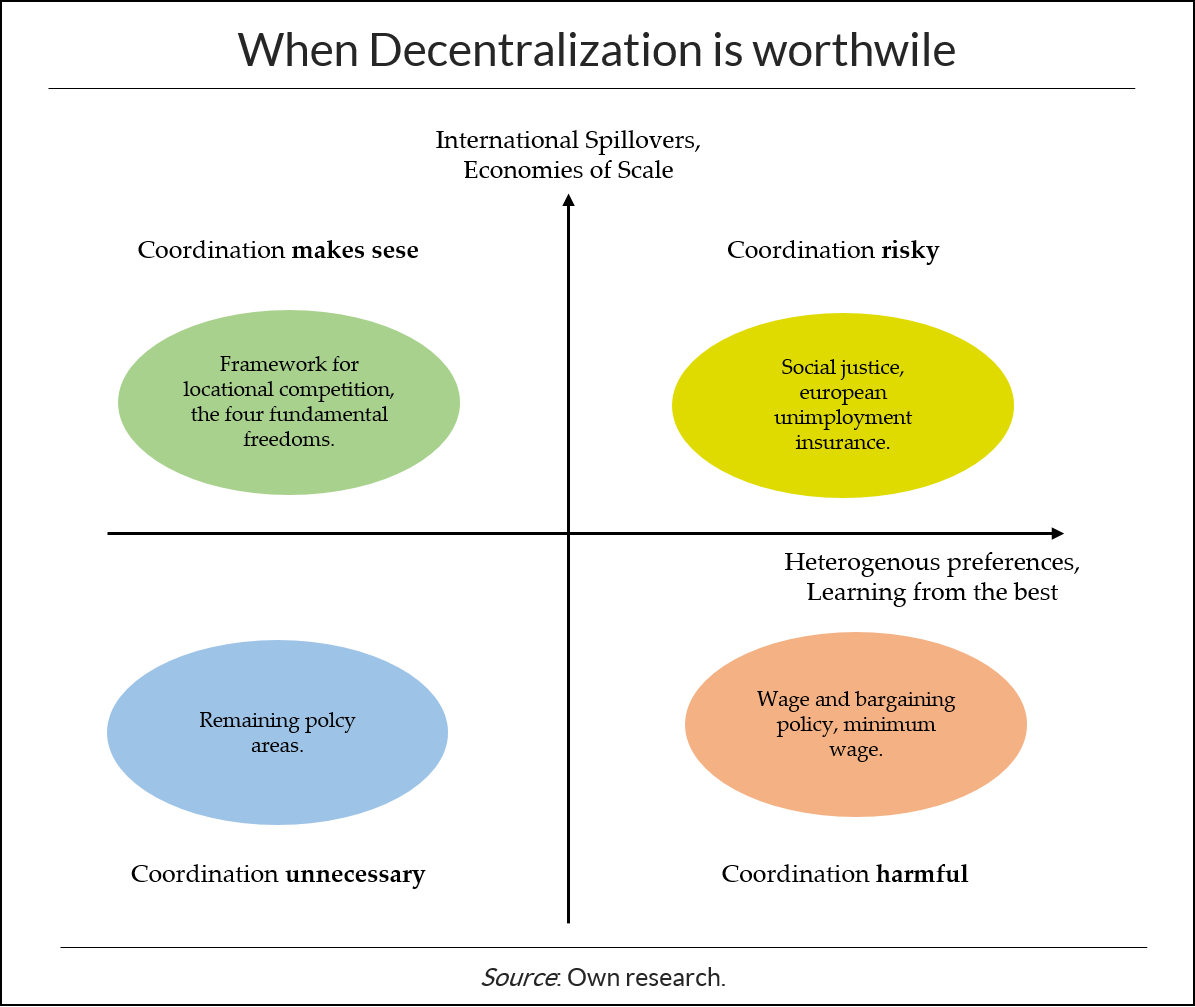 The main burden of adjusting to asymmetrical shocks in the European Monetary Union is carried by labor markets. Hence, everything that increases the operating power of European labor markets also increases the chances that the euro will survive in its current form. This, however, does not mean that labor market-, employment- and socio-political competences are essentially sacrosanct for centralization. Only that which intensifies competition in European labor markets should be centralized. This includes the four fundamental freedoms.Â  It is not only employees throughout Europe that are becoming more mobile, but work places, as well. The unrestricted trade of goods and services makes budget restrictions of agreement partners harsher. The free movement of labor and capital contributes to the fact that workers and business are becoming more mobile and react adequately to asymmetric shocks. The case of meaningful coordination is depicted in the north-western quadrant.

A coordination of policies in labor markets can also be risky (see north-eastern quadrant). A European system of unemployment insurance[6] is one such case. The idea is not bad per se as it enables a better risk comparison in asymmetrical shocks and it can automatically stabilize in economic slumps. However, an increase in intra-industry trade invalidates the first advantage and dominant structural factors negate the second. Only the disadvantages of centralized unemployment remain. The financial burdens brought by unemployment insurance are passed on to third parties throughout Europe. “Moral hazards“ become more appealing to social partners and the appreciation and depreciation mechanism is severely impeded. A further negative consequence is that Europe suffers from asymmetric trends in labor markets. A European unemployment insurance essentially degenerates into a form of financial compensation. As a result, structural change is blocked and economic growth is hindered.

Europe-wide coordinated policies are completely detrimental in the south-eastern quadrants. The most prominent case of this is wage and collective bargaining policies, but this verdict also applies to minimum wage and labor market policies. Globalization and technological advancements have made labor markets more heterogeneous. While this has long been the case for sectors and now companies within sectors, it is also increasingly true of many professions. The appropriate response to structural changes is to decentralize wage and collective bargaining policies. Work alliance agreements were the first solution, and increased company-level agreements will follow.Â  A reaction involving decentralized wage and bargaining would prevent further rises in unemployment, stabilize the EMU, and give the European Union a future once more. On the other hand, a collective European wage and bargaining policy would explode unemployment, put an end to the euro, and destroy the European Union.

The EMU’s condition continues to be critical; the diagnosis is multiple “moral hazard“ syndrome. Vertically efficient distributed competences could help. More flexible labor markets, which are vital as long as the euro is a “currency without a state,“ are stabilizing the euro. Politicians must react appropriately to economic and political heterogeneity. The combination of central bargaining in Europe, a European social- and transfer union and a fiscal policy courtesy of Brussels is a deadly cocktail. The order of the day is more decentralized economic policy. This will revive institutional competition within the EWU, eliminate persistent high unemployment rates, and initiate economic growth. Without inefficient inter-regional financial transfers, regional catching-up will take speed once more.Â  The economic base will become more stable and the heterogeneous preference of European citizens will be better met. Ultimately, competitive federalism will stabilize the entire EMU and thereby decrease the danger of a Euromageddon.