“In general, the art of government consists in taking as much money as possible from one party of the citizens to give to the other.“ (Voltaire)

There are not many things which have the capacity to excite the world time after time, but the unequal distribution of income is one of them. In this case inequality has developed rather ambivalently. The gap between rich and poor countries is becoming smaller worldwide. However, countries are distributing income less equally. External convergence and internal divergence go hand in hand. The debate about inequality is a perennial political issue. Particularly in Europe, the call for more governmental redistribution is becoming louder. It is driven by the moralizing force of “justice“, with allocative and political risks as well as side effects of inequality playing more of a supporting role. In the United States, the debate is progressing differently in spite of relatively high inequality internationally. There it is not so much equal outcomes but rather equal opportunity which is at the forefront of the distribution policy agenda. The issue which matters most to the middleclass is that of social mobility, rather than rising income inequality.

It is undisputed that for some time incomes have been becoming less equally distributed in most developed countries. The decisive factor is household income, comprised not only of labor income but also all other forms of income of household members, including capital income. In regard to household income, one must distinguish between market income and disposable income. Market income is the income before governmental redistribution, disposable income that after redistribution. Market income in particular has been becoming less equally distributed for a long time now. In the Anglo-Saxon world, the process of inequality had already begun in the mid-70s. In contrast, incomes in the other three “worlds“ first began to develop less equally a decade later. Since the mid-80s, the Anglo-Saxon and Mediterranean worlds have continuously exhibited the highest and almost the same level of inequality. In terms of market income, the countries of the Nordic and continental worlds play in a different, more equal league. 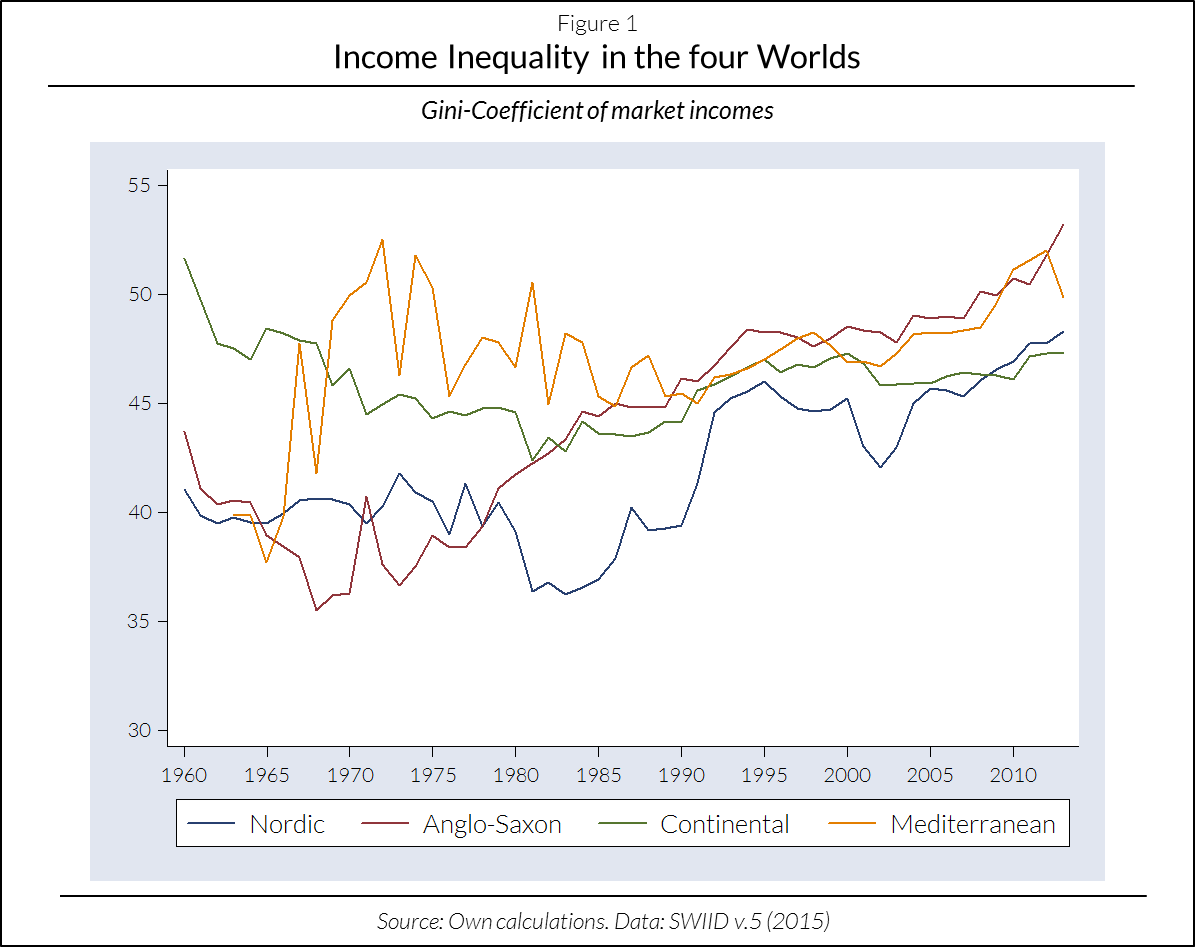 However, the inequalities in the countries of these worlds are developing quite differently. In the Nordic world, both Denmark (strongly rising) and Norway (strongly falling) have been strikingly different since the mid-2000s. The strongest rise in inequality in the Anglo-Saxon world is not being exhibited by the United States, but rather by Britain. Germany features the greatest increase in inequality among the countries of the continental world, and hardly distinguishes itself from France, the longtime leader in terms of market inequality. In the Mediterranean world, Portugal is in the lead with respect to inequality. The largest increase in inequality was recorded by Spain during the period of enormous economic boom in the 90s. Meanwhile, the euro crisis has intensified inequality once more. Within these worlds, market income inequality is developing quite differently. 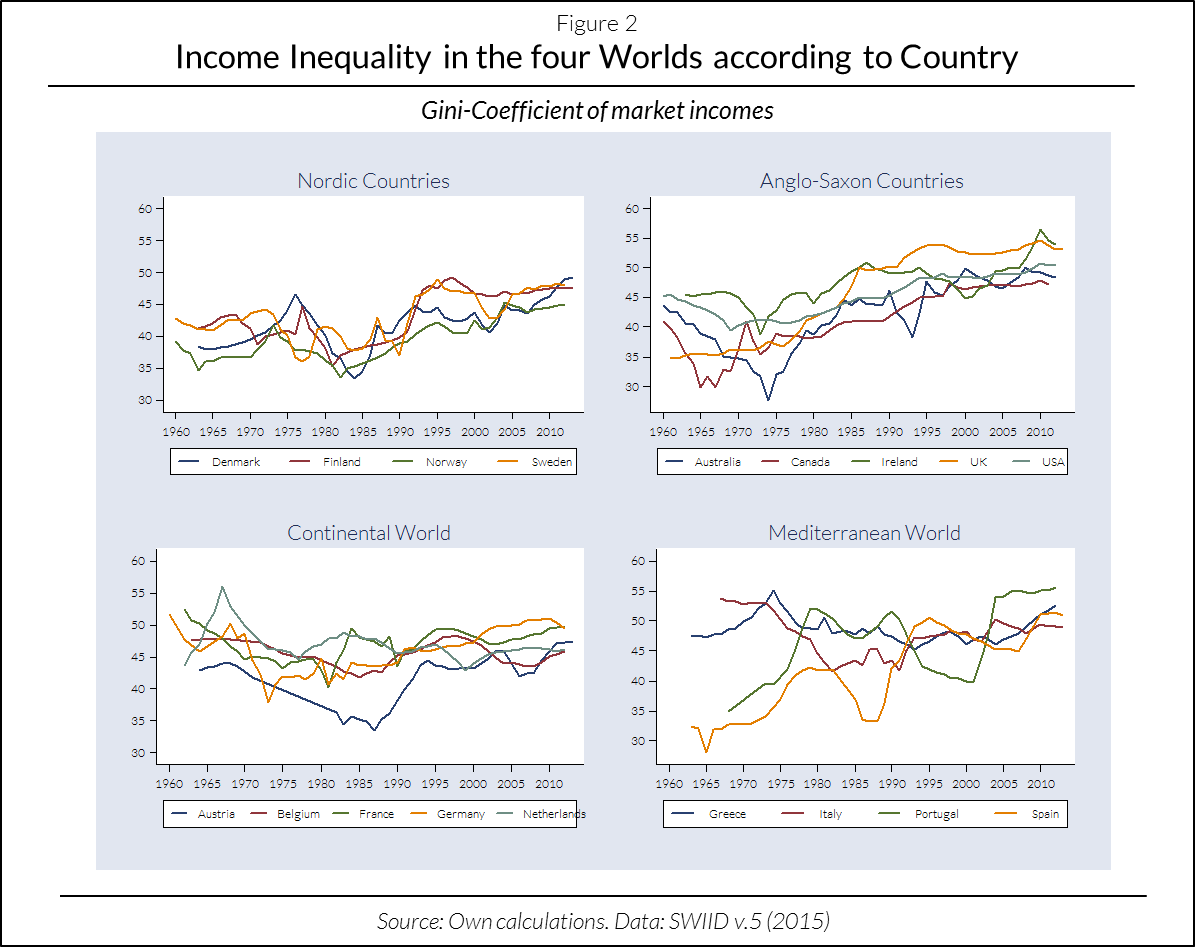 There exists no prevailing consensus among economists regarding the causes of unequal income markets. A “war of the models“ rages and the fronts are unclear. What is undeniable is this: above all else, globalization, technology and institutions are driving inequality. The first two can explain why inequality of market income has increased in all four worlds in recent decades. Globalization and technological progress increase the wealth of all. However, this is less beneficial for lower income groups than for higher ones. The differences in the individual countries are the result of different institutional arrangements. This applies not only to the demographic development, but also to the arrangements in the national labor markets. Unequal developments across nations in the working hours of high- and low-wage earners, in structural change, in the rate of female employment, in household size and in homogamy contribute to the variation in the countries’ degree of deviation from the trend.

In politics, unequal distribution of market income triggers redistribution policy reflexes. Everywhere in politics the demand is being made for (even) more redistribution from the top to the bottom. Only: what is actually so bad about market inequality? If we focus on economic efficiency, we find “good“ and “bad“ inequality. “Good“ is that which provides incentives to increase investment in human and physical capital as well as technical knowledge. “Bad“ inequality is that which arises because a lack of competitive structures in the markets leads to monopoly rents. In reality, the demand for more redistribution is usually not made for allocative reasons, but rather in the name of “justice“. Justice is a philosophical rather than an economic category. Normative criteria dominate. What is seen as fair depends strongly upon the observer’s viewpoint, and agreement is difficult in the presence of individual value judgements. However, there is one generally accepted value judgement: the guarantee of a living wage.

The reality is different, and everywhere more redistribution is taking place than would be necessary to effectively fight poverty. The reason is a political-economic one. In democracies, governmental redistribution is also a parameter of politicians competing in the voting markets. However, politicians in the four worlds redistribute very differently. In the Nordic world there is traditionally more redistribution than elsewhere, although the market income is distributed less unequally. Both also apply to the countries of the continental world. However, there the redistribution of wealth is not only lower than in the Nordic countries. Politics has also reacted less strongly to the increase in market-based inequality. In the Mediterranean and Anglo-Saxon worlds the least amount of redistribution takes place. The Anglo-Saxon countries have responded quickly and noticeably to rising inequality. Things were different in the Mediterranean world. There, politics showed only a delayed reaction to the growing inequality of market income, and it was not until the new millennium that they began redistributing more. 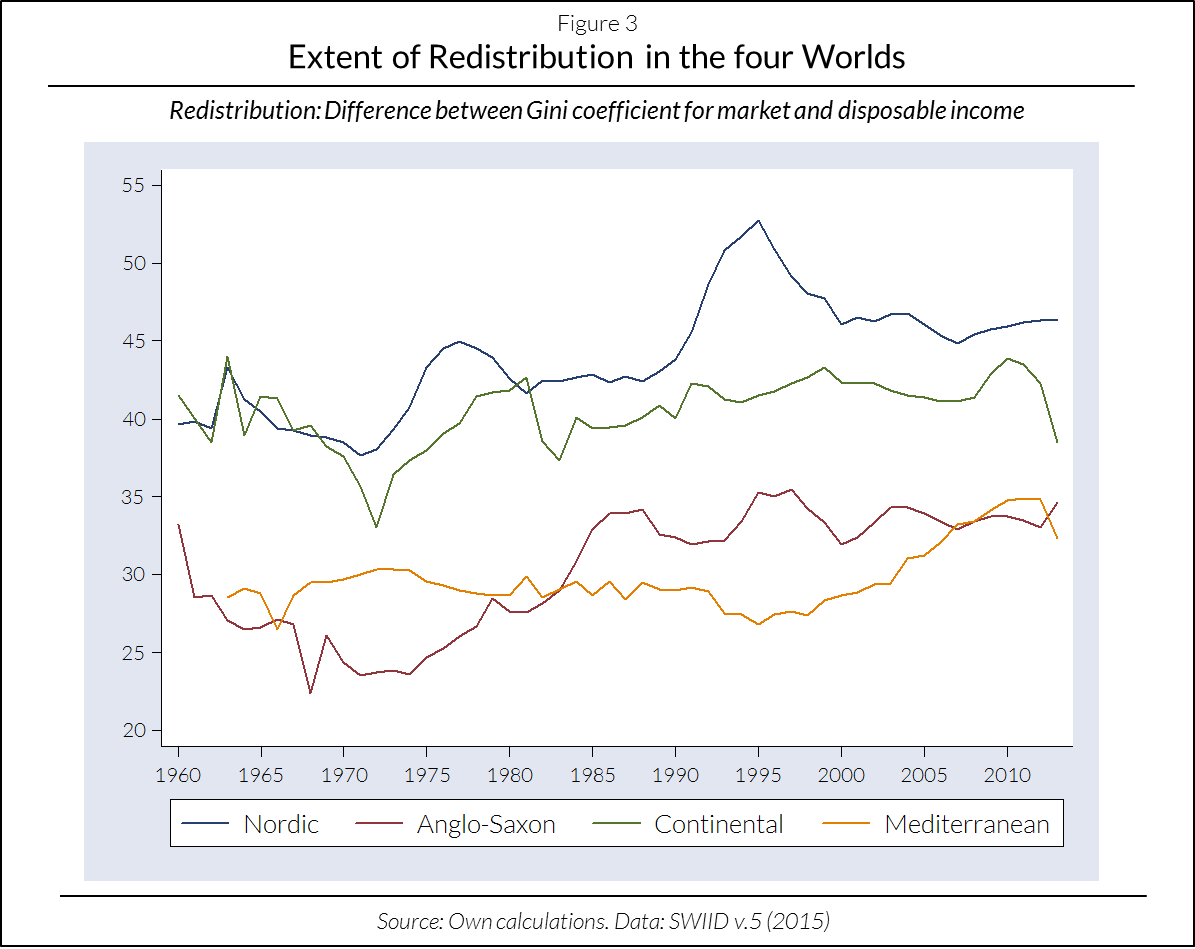 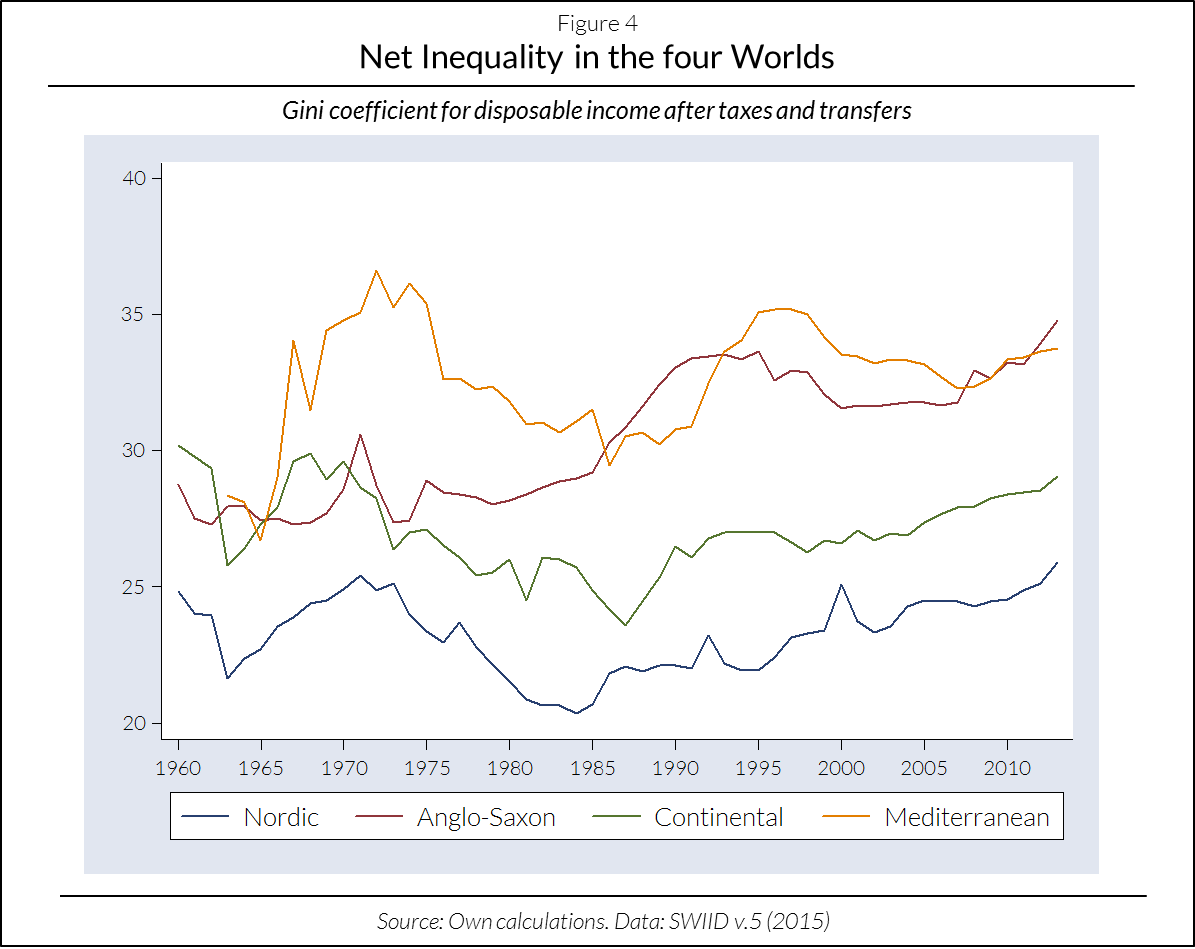 In Anglo-Saxon countries, the desire for equality appears to be more pronounced than elsewhere. They place somewhat less value on outcomes equality and redistribution. Particularly in the USA, there is still a strong belief that one can rise from rags to riches, as well as the widespread hope that one’s children will have it better. In fact, however, neither the professional (intra-generational) nor the inter-generational mobility is very pronounced. It is a maintained illusion. Among the rich countries the United States more likely finds itself in the backfield. At the forefront are the Nordic countries, but they also redistribute more than any of the others. However, they rely less on direct, monetary redistribution via taxes and transfers. They redistribute more strongly in indirect ways, through investment in many areas (kindergarten, schools, etc.) which foster human capital. In this way they increase social mobility, and by doing so make a more uniform distribution and high economic growth possible. The trade-off between allocation and distribution is thus mitigated. 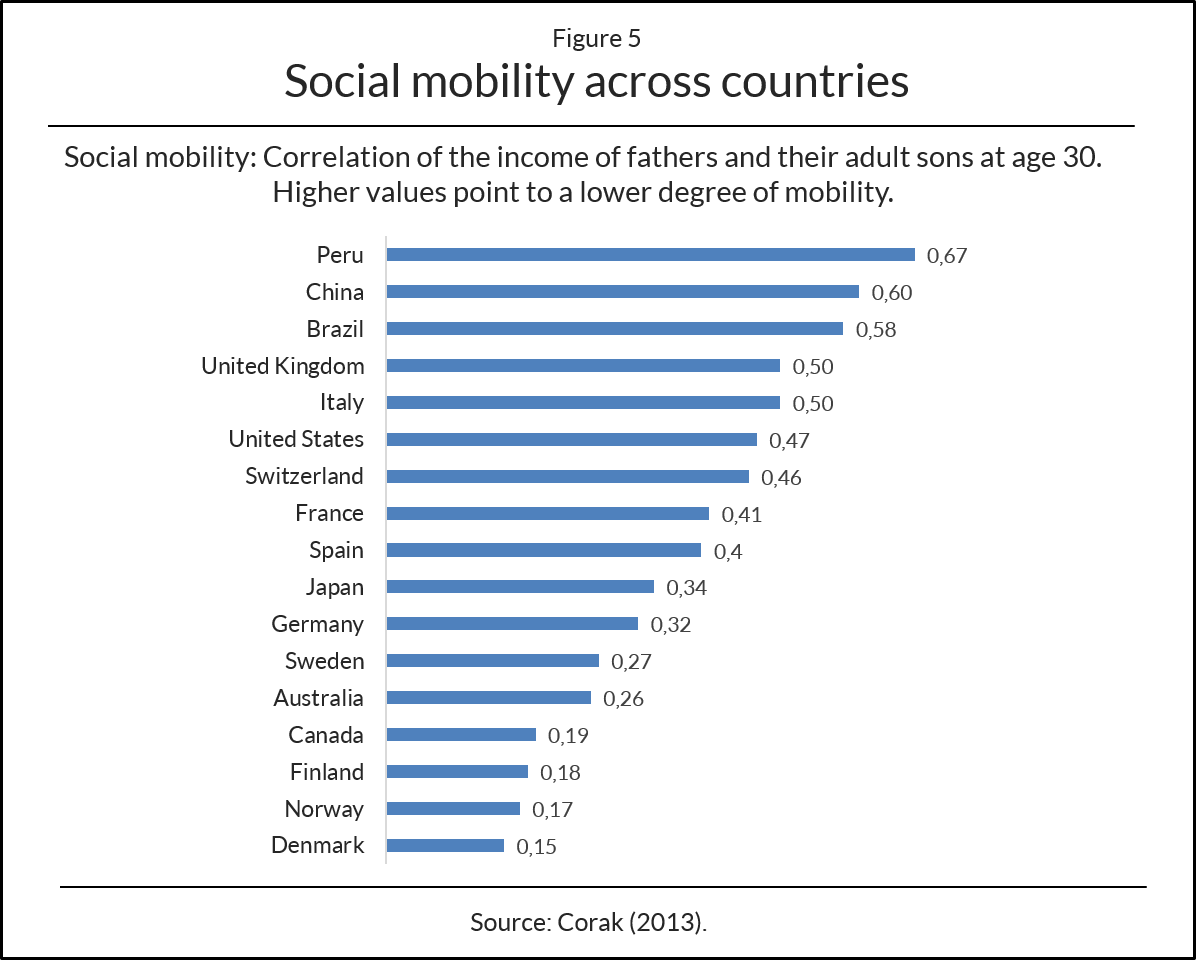 What drives social mobility? Education, family and labor markets are the neuralgic points. Private and public investments in human capital increase social mobility. A lower variation in the quality of schools has a similar effect. Also positive is anything that reduces social segregation. Through such actions, access to education becomes easier for poorer member of society. Stable family structures are also beneficial for social mobility. Children who grow up in families with two parents have better opportunities for career advancement. A well-developed state kindergarten and school system, meanwhile, can reduce the negative impact of unstable families. A functioning labor market also has a positive effect on social mobility. It leads to more stable employment relationships, particularly unskilled labor in accelerated structural change. However, the popular thesis of the Princeton economist Alan Krueger that more evenly distributed incomes increase social mobility (“Great Gatsby-Curve“) is built on sand empirically. 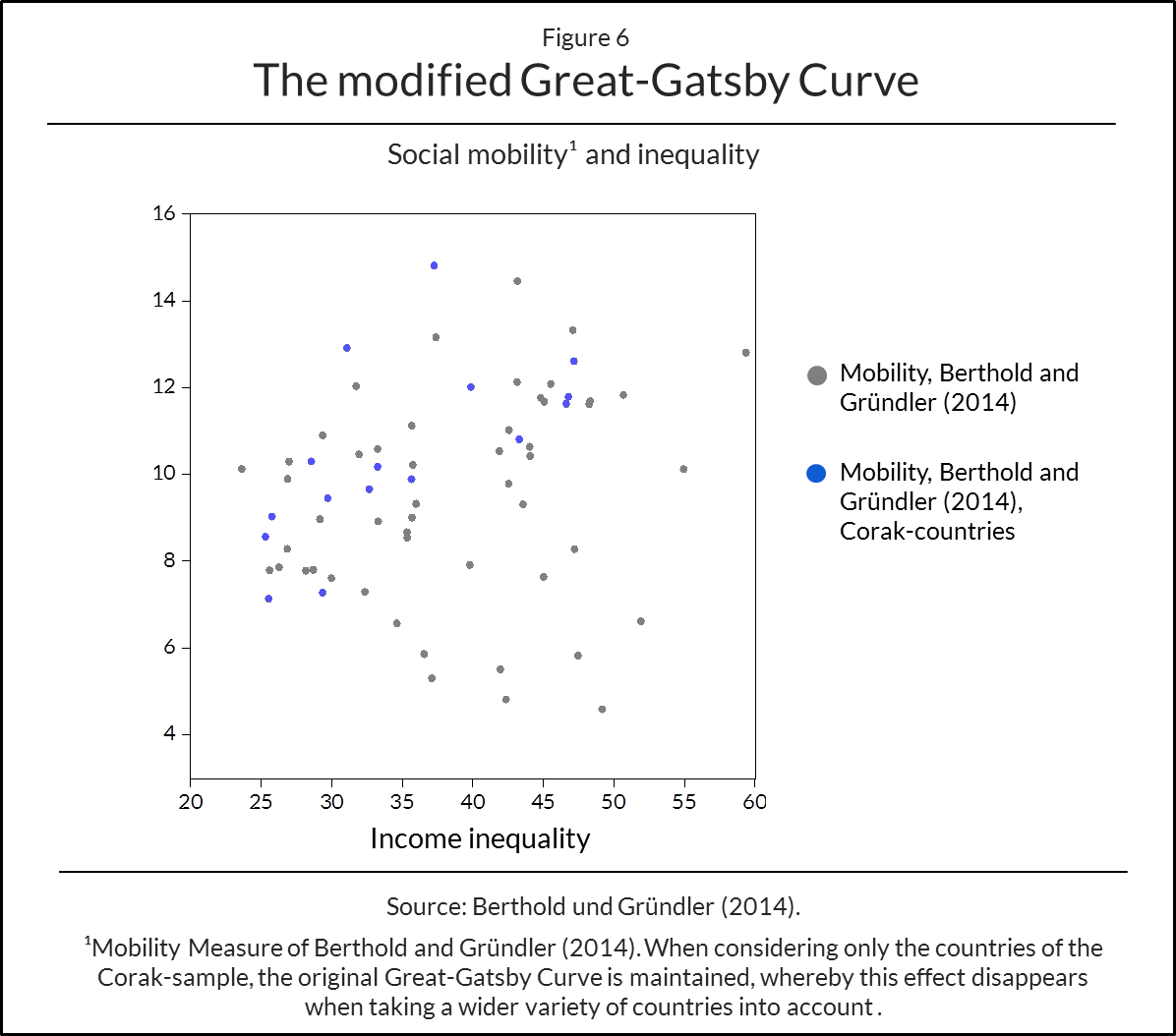 Anyone who wants to reduce the unequal distribution of income without taking great allocative risks should focus less on monetary governmental redistribution. This is, however, still necessary in order to guarantee a living wage. One should instead do everything possible to promote social mobility. The most important starting points are obvious: more stable families, better schools, and more flexible labor markets. Two things can help to stabilize families. One is a comprehensive system of day-care centers, kindergartens and full-day schools. The other is flexible working time models. Both help make it easier to balance career and family. This opens up two problems: (1) To what extent should the government participate in the financing of investment in human capital? The debate about fees for kindergartens and university is controversial. (2) How intensively should the government intervene in the education of children? Here the discussion about the child care subsidy is no less heated.

The quality of the schools can only be improved with a comprehensive package of measures. This much, at least, is indicated by international educational research. An important element is that pupils in the school system are not separated too early. In addition, to ensure that schools do not engage in “cream-skimming“ where there is a preference for accepting better students, governmental financial allocations for schools should be higher for students who perform more poorly. The Dutch “Formula Funding“ program provides an example of how it could work. A third element of the package could be education vouchers. They should only take effect when combined with “Formula Funding“. Then, however, they kill two birds with one stone: the segregation of students according to socio-cultural and economic background is reduced, while competition between schools is intensified. Meanwhile, schools also improve when the teachers do so. The government must therefore ensure that teachers are better trained. Finally, more intensive supervision of the students also increases the quality of schools.

Another important component of higher social mobility is flexible labor markets. Career advancement depends greatly upon the stability of the employment in question. Through „training on the job“, stable employment determines how the particular labor productivity and thus the earned income will develop. All interruptions in this process due to unemployment leave scars on an individual’s career biography. The risk of unemployment is low if wages, wage structures and working hours are flexible and employees are geographically and occupationally mobile. The task of maintaining such conditions falls to the collective bargaining parties, but the government can also help stabilize employment. The Nordic countries have shown that a policy of „flexicurity“ can help keep unemployment low. Low employment protection, generous unemployment insurance, efficient active labor market policy and decentralized collective bargaining at enterprise level are the key ingredients of such a policy.

The traditional response to greater economic inequality is more monetary governmental redistribution. Usually, however, such a solution is not really efficient. All tax-benefit systems have allocative risks and side effects. Unemployment increases, economic growth suffers. Often, this conventional form of governmental redistribution is not only efficiency-devouring, it is also „Grade C„ in terms of distribution. The logic of democratic systems prevents redistribution from occurring mainly from “rich to poor“. Political competition forces redistribution in the middle class primarily from the “not very rich to the not extremely poor“ (Bernhard Külp). The basic problem is that in most cases what is sought is equality of opportunities. The trade-off between allocation and distribution can, however, be reduced by targeting opportunities more strongly. Here the appropriate instrument is social mobility. By starting with the most important drivers of social mobility, one can kill two birds with one stone: Inequality decreases and economic growth increases. 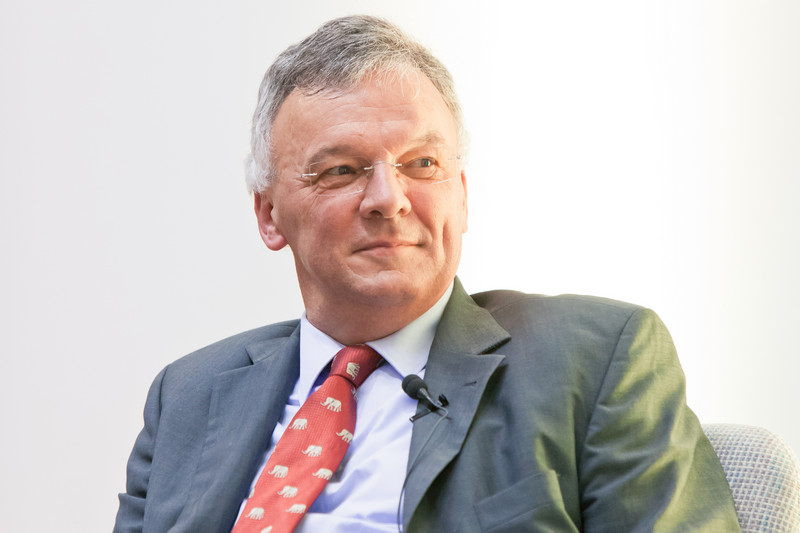